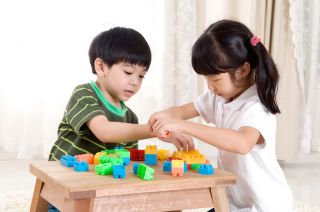 Researchers found that 3- and 5-year-olds in China felt happier after they voluntarily shared a reward with a classmate than they did when they kept the reward all for themselves, according to the findings published in the May issue of the journal Frontiers in Psychology.

This shows that when sharing is voluntary and altruistic, children experience a positive mood, which may lead to further sharing, said lead study author Zhen Wu, an assistant professor of psychology at Tsinghua University in Beijing, China. [8 Tried-and-True Tips for Talking to Preschoolers]

When sharing is expected due to social norms, children are likely to follow the social norm and share even more, but they don't experience happiness as a result, she said.

"We can't expect young children to share under pressure and be happy about it," Wu told Live Science.

Previous studies have found that toddlers as young as 22 months old display more happiness when they share voluntarily. Other researchers have found that children between 3 and 6 years old expect people to be happier after sharing than after not doing so.

In the new study, researchers recruited 51 3-year-olds and 88 5-year-olds from kindergartens in Beijing. Half of the preschoolers were presented with a situation in which they were asked to share voluntarily, while a second group experienced more pressure to share.

During the study, all of the children were given six stickers as a reward for completing a puzzle that was already assembled halfway when they started. Then, each participant was told that he or she could decide whether to share these stickers with another child, who was not present in the room during the study, but who had supposedly completed the first half of the puzzle the day before.

In the obligated-sharing scenario, the kids were told the stickers belonged to them as well as to the child who started the puzzle, because both of them had worked on half of the same puzzle.

In the voluntary-sharing scenario, the children were told that the stickers belonged to them, because they finished the puzzle. But also, they were told that another child completed a different puzzle yesterday and did not get any reward, because the researcher forgot to bring enough stickers. [25 Scientific Tips for Raising Happy Kids]

The study found that age mattered in the sharing behavior of preschoolers. Thirty-three percent of 3-year-olds shared their stickers when it was voluntary, but almost twice as many (63 percent) shared when it was obligated.

But the 5-year-olds seemed more willing to share. About 68 percent of them voluntarily shared their stickers, and 87 percent shared when they felt pressure to do so.

Interestingly, 5-year-olds handed out more stickers when they were obligated to share than when they could do so voluntarily. But 3-year-olds shared a similar number of stickers whether their sharing was voluntary or obligatory, according to the findings.

The study suggests that older children are more likely than younger tots to obey social norms in situations that involve merit-based sharing, Wu said. A merit-based approach means that rewards are divvied up based on how much work each individual contributes to completing a task. [10 Ways to Promote Kids’ Healthy Eating Habits]

Among the children who were willing to share, regardless of their age, the researchers found that preschoolers who shared voluntarily were happier when putting stickers into the other child's envelope than when they placed stickers into their own envelope. In other words, the act of sharing voluntarily brought the happiest facial expressions on children compared with required sharing and even holding on to some stickers for themselves because they earned a reward.

A child's understanding of merit-based sharing increases with age, but other factors can also play a role. Older children are better at understanding the mental states of others, including their emotions, needs, wants and desires, and this understanding can also increase children's sharing, Wu said.

A child's empathy, sympathy, socialization and sense of fairness can also influence the desire to share, she said.

One of the limitations of the study is that it's not known whether preschoolers would have behaved and felt similarly if asked to share with a classmate who was sitting in the same room during the task.

Another limitation may be cultural, Wu said. Chinese culture emphasizes harmonious social relations, and children in that culture are expected to obey norms for obligatory sharing and comply with requests from adults, Wu said. Consequently, Chinese children may get used to following social norms without much change in their emotions, she said.

Further research is needed of young children who are obliged to share in cultures that place more emphasis on independence and autonomy, to see if this leads to more unhappiness compared with Chinese preschoolers, Wu said. However, she said she suspects, based on the existing evidence, that voluntary sharing is similar across cultures.