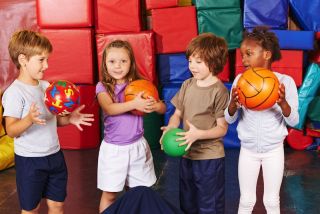 When viewing puppets stealing from each other, 3-year-olds want to return the stolen items to the victim. And they seem almost equally concerned whether the thieving puppet takes something from them personally or from another puppet, researchers found.

"Children, from a very young age, have some sense of justice, in the sense that they'll treat others as they expect themselves to be treated," said study co-author Keith Jensen, a psychologist at the University of Manchester in England.

But unlike adults, little ones don't seem as keen to dole out punishment, the study found. Instead, they preferred to comfort the victim by returning lost and stolen items. [That's Incredible! 9 Brainy Baby Abilities]

From a young age, babies are tuned into the intricacies of social interactions, research has found. Even 8-month-old babies want to see wrongdoers punished, and will snatch treats away from nasty puppets they had seen previously yelling at another puppet, according to a 2011 study published in the journal Proceedings of the National Academy of Sciences. A 2013 study in the journal Proceedings of the Royal Society B found that tots as young as 19 months can guess what other people are thinking. A sense of fairness kicks in early, too: When handing out sweets, many children would prefer to toss an extra treat in the trash, rather than see it divvied up unfairly, Jensen said.

To better understand preschool justice, Jensen and his colleagues set up an experiment in which 3-year-olds watched two of four different puppet shows.

In one scenario, a puppet stole from either another puppet or the child. In the second, an unfair puppet took a toy or cookie from a child or puppet and gave it to someone else. In the third scenario, the master puppet took the treat or toy away from one of the other parties, but didn't give it to anyone else. In the final experiment, the puppet asked another puppet (or the child) if he could redistribute the goodies. In response to these losses, the victim — a "whiny," protesting puppet — would act distressed, Jensen said.

Afterward, the tikes had the option of pulling a rope hidden under the puppet show table and removing the cookies or toys to a cave, meaning that no one could have them.

The kids pulled the rope whether they or another puppet were the victims of theft, unfairness or loss, suggesting that the preschoolers didn't make great distinctions between themselves and others, the researchers said.

And when the kids faced the same puppet injustices but had the option to right the wrong by returning an item to the original puppet owner using a second rope pulley, toddlers usually chose to return the object, forgoing the chance to use the cave punishment, according to the study, which was published today (June 18) in the journal Current Biology.

"The 3-year-olds didn't seem to want to punish; they wanted to help as much as they could," Jensen told Live Science. "If the only thing they could do was punish the thief, they would just cry."

The findings suggest that, at this young age, children have an intuitive sense of restorative justice, which focuses on repairing harm caused by crime. This differs from retributive justice, which focuses on punishing evildoers, Jensen said. Youngsters seem to be strongly motivated by empathy and the distress of others, rather than a normative sense of right and wrong, such as the notion that "stealing is always wrong," Jensen said. [5 Animals with a Moral Compass]

While other studies have shown that toddlers have a sense of justice, the experimental design in those studies couldn't delineate whether the kids were focused more on the victim's pain or the perpetrator's wrongdoing, said Katherine McAuliffe, a postdoctoral researcher in psychology at Yale University. The new study clearly shows what the little ones care about, she noted.

"They are paying attention to what happened to the victim, and they want to make sure they are OK in the end," McAuliffe told Live Science.

One limitation of the study, however, is that when the preschoolers had the option of returning the object, they were taking it back from the thief — meaning they were both punishing and tending to the victim's needs in one step, McAuliffe said.

"So, I think perhaps a stronger test of true restorative justice is, the perpetrator keeps the object, and the child has an opportunity to give an object to the victim," McAuliffe added.