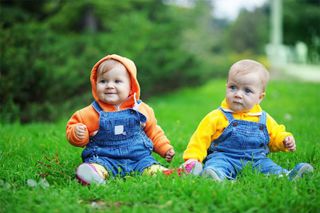 They may be small and not be able to hold an adult conversation, but babies are proving their collective cleverness. As soon as scientists figured out smarter ways to uncover the wee ones' abilities, they began finding infants' skills are more than they're cracked up to be.

From as early as 10 months of age, babies figure out that might makes right. When shown scenes of big and small cartoon blocks interacting, infants stare longer (indicating more surprise) when the big one yields the right-of-way to the small one than they do when the small one is subservient. The finding, published in January 2011 in the journal Science, suggest that babies understand social hierarchies and know that size can determine who's in charge.

The results suggest that the blueprints of social interaction are built into the human brain.

"When you're showing these kind of fairly sophisticated or rich concepts are in place before infants get language and before they really participate extensively in social interactions with the world, that is telling you: What are the basic building blocks of the mind?" study researcher Lotte Thomsen of the University of Copenhagen told LiveScience. "These are really the basics of how we think."

Even before they can say more than "mama" and "dada," babies can decipher emotions … of dogs. A 2009 study showed that 6-month-olds could match the sounds of an angry snarl or friendly yap with photos of dogs showing the corresponding body language. "Emotion is one of the first things babies pick up on in their social world," said lead researcher Ross Flom, a psychology professor at Brigham Young University in Utah. The study was published in the journal Developmental Psychology.

While your infant still might not speak, he or she likely knows when you're feeling down. As young as 5 months of age, babies can accurately pick out an upbeat tune from a gloomy one, according to a study published in 2010 in the journal Neuron. And by 9 months, babies could also identify the sorrowful sound of Beethoven's Seventh Symphony from a lineup of more joyful songs.

Speaking of music, babies can't seem to resist it. Not only are their ears tuned to the beats, babies can actually dance in time with them, according to a study published in 2010.

To test babies' dancing disposition, the researchers played recordings of classical music, rhythmic beats and speech to infants, and videotaped the results. They also recruited professional ballet dancers to analyze how well the babies matched their movements to the music.

The babies moved their arms, hands, legs, feet, torsos and heads in response to the music, much more than to speech. The findings, published in the journal Proceedings of the National Academy of Sciences, suggest this dancing ability is innate in humans, though the researchers aren’t sure why it evolved.

Mirror actions of others

No surprise that the look of amazement in a baby’s eyes as he or she explores is matched by churning activity inside the noggin. A 2009 study revealed that when 9-month-olds watch an adult reach for an object, the motor region in their brain gets activated as if they are actually doing the reaching. The study researchers suggest mirror neurons are at play.

These brain cells fire for both observed and real actions and have only been directly measured in monkeys. In one of the study’s experiments, once the babies had observed the experimenter grabbing for a toy, the "mirror" brain activity also occurred just prior to the action. Having that predictive capability could help little ones respond to another's actions to, say, intercept the movements and take the toy. The brain finding could also be an example of baby's first steps into the social world, the researchers suggest in the journal Biology Letters.

Babies can apparently learn even while asleep, according to a 2010 study. In experiments with 26 sleeping infants, each just 1 to 2 days old, scientists played a musical tone followed by a puff of air to their eyes 200 times over the course of a half-hour. A network of 124 electrodes stuck on the scalp and face of each baby also recorded brain activity during the experiments. The babies rapidly learned to anticipate a puff of air upon hearing the tone, showing a fourfold increase on average in the chances of tightening their eyelids in response to the sound by the end of each session.

As newborns spend most of their time asleep, this newfound ability might be crucial to rapidly adapt to the world around them and help to ensure their survival, researchers said. The study was published in the journal Proceedings of the National Academy of Sciences.

Are math whizzes … sort of

Babies know their 2s and 3s. In a 2006 study, 7-month-olds were presented with voices of two or three women saying "Look," and they had to choose between looking at a video image of two women saying the word or three women saying it. The babies spent significantly more time looking at the image matching the number of women speaking. The study was published in the journal Proceedings of the National Academy of Sciences.

Know their p's and q's

When we say babies do this and that even "before they learn to talk," we're obviously not including baby talk and other language smarts.

In a 2007 study published in the journal Science, researchers had 36 infants watch silent videos of three bilingual French-English speakers reciting sentences. After being trained to become comfortable with a speaker reciting a sentence in one language, babies ages 4 months and 6 months spent more time looking at a speaker reciting a sentence in a different language —demonstrating that they could tell the difference between the two.

"Newborns can be said to be 'intelligent' in that they have the ability to almost effortlessly learn any of the world's languages," psychologist George Hollich of Purdue University told LiveScience in 2007. Some of Hollich's research shows that babies start to understand grammar by the age of 15 months, processing grammar and words simultaneously.