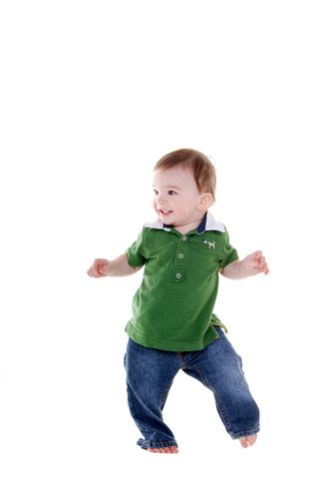 Babies move in time to music even before they learn to speak, new research shows.
(Image: © Dreamstime)

Babies love a beat, according to a new study that found dancing comes naturally to infants.

The research showed babies respond to the rhythm and tempo of music, and find it more engaging than speech.

The findings, based on a study of 120 infants between 5 months and 2 years old, suggest that humans may be born with a predisposition to move rhythmically in response to music.

"Our research suggests that it is the beat rather than other features of the music, such as the melody, that produces the response in infants," said researcher Marcel Zentner, a psychologist at the University of York in England. "We also found that the better the children were able to synchronize their movements with the music, the more they smiled."

To test babies' dancing disposition, the researchers played recordings of classical music, rhythmic beats and speech to infants, and videotaped the results. They also recruited professional ballet dancers to analyze how well the babies matched their movements to the music.

During the experiments, the babies were sitting on a parent's lap, though the adults had headphones to make sure they couldn't hear the music and were instructed not to move.

The researchers found the babies moved their arms, hands, legs, feet, torsos and heads in response to the music, much more than to speech.

{{ video="http://www.livescience.com/common/media/video/player.php?videoRef=LS_100315_dancing-babies" title="Babies Bounce to the Beat" caption="In an new study, infants engaged in more rhythmic movements, or dancing, when exposed to drumbeats and other rhythmic stimuli than they did to speech. Credit: PNAS" }}

Though the ability appears to be innate in humans, the researchers aren't sure why it evolved.

"It remains to be understood why humans have developed this particular predisposition," Zentner said. "One possibility is that it was a target of natural selection for music or that it has evolved for some other function that just happens to be relevant for music processing."

Zentner and his colleague Tuomas Eerola, from the Finnish Centre of Excellence in Interdisciplinary Music Research at the University of Jyvaskyla, in Finland, detailed their findings in the March 15 issue of the journal Proceedings of the National Academy of Sciences.