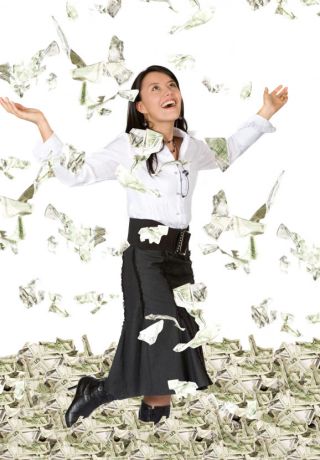 Just the mere thought of money can turn a person selfish, so that he helps others less often and prefers to play alone, according to a study. The concept of money, they suggest, makes a person feel more self-sufficient and thus more apt to stand alone. You might be more self-sufficient, but that doesn?t mean you?ll be happy. A survey of women found that those with higher incomes devoted more time to working, commuting, childcare and shopping, leading to more stress and tension than women pulling in less cash.

If you're trying to buy happiness, you'd be better off putting your money toward a tropical island get-away than a new computer, a new study suggests.

The results show that people's satisfaction with their life-experience purchases — anything from seeing a movie to going on a vacation — tends to start out high and go up over time. On the other hand, although they might be initially happy with that shiny new iPhone or the latest in fashion, their satisfaction with these items wanes with time.

The findings, based on eight separate studies, agree with previous research showing that experience-related buys lead to more happiness for the consumer. But the current work provides some insight into why.

Satisfaction with a purchase could also come down to mindset. When participants in one study thought of material purchases, such as a music CD, as an experience (many hours of enjoyable listening), they were more satisfied than those who viewed the purchase as just a material item.

In another study, 142 participants were asked to think about either a material or experience-related purchase they had made that cost at least $50. Then, they answered questions about: how difficult the decision was to make; how concerned they were that they made the right choice; and how satisfied they were with the purchase initially and at present.

The people who thought of a material purchase were significantly more likely to report feeling concerned about the buy and less satisfied with their choice at present than those who had recalled an experiential purchase.

A third study involved 164 participants who were asked how they felt about a hypothetical situation in which they had made a purchase, but later found out that other, superior choices existed. They imagined either buying a material good, such as a wristwatch, laptop, MP3 player or a pair of jeans, or an experience, including a meal at a restaurant, a movie viewing, a New York City show, or an island vacation.

Subjects who imagined a material purchase were more likely to be disturbed by the availability of better options, and in turn, reported diminished satisfaction with the buy, than those who imagined an experiential purchase.

And participants were more likely to be jealous of a rival's superior purchase if the item in question was a possession rather than an experience.

Since materials are more easily compared with other things than experiences are, material buys bring more concern and less happiness than experiential ones, the researchers from Cornell University say.

The results were published in the January issue of the Journal of Personality and Social Psychology.