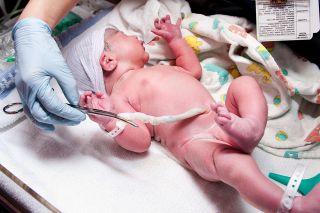 A newborn's umbilical cord is usually severed soon after birth, once the placenta is no longer actively transferring blood.
(Image: © Paul Hakimata/Alamy)

The birthing practice known as "lotus birth," in which parents allow a newborn's umbilical cord to remain attached to the placenta until the cord breaks naturally, is enjoying some popularity, perhaps especially among those who favor home births and assign special significance to the expelled placenta.

In a lotus birth, rather than cutting the umbilical cord within a few minutes of the birth, the parents carry the placenta — still connected to the newborn baby — in a bowl or special pouch, for days, long after it has ceased to actively transfer blood to the newborn.

Hospitals, by comparison, usually dispose of the placenta shortly after the umbilical cord is cut. Advocates for lotus birth argue that prolonged contact with the placenta eases the newborn's transition to life outside the womb, and claim that the practice may provide health benefits. However, experts are skeptical about lotus birth, and some warn that it may even be harmful to the baby. [5 Reasons Why Placentas Are Amazing]

There is significant risk associated with keeping a newborn connected to what is essentially a dead and decaying organ, Dr. William Schweizer, an OB/GYN and clinical associate professor at New York University Langone Medical Center, told Live Science in an email.

"Risks center around a concern for infection in the placenta, which can spread to the baby. The placenta is dead tissue, and because of this, the blood in it is prone to bacterial overgrowth," Schweizer explained.

For a developing fetus, the umbilical cord is a lifeline, with the placenta sending nutrients and taking up waste through the pulsing connection. But once the baby is out, the placenta is no longer needed.

The idea of lotus birth emerged in 1974 in the U.S. and Australia, according to an excerpt from the book "Gentle Birth, Gentle Mothering: The wisdom and science of gentle choices in pregnancy, birth and parenting" (One Moon Press, 2005), written by Dr. Sarah Buckley and published on the website Pregnancy, Birth and Beyond.

"Lotus birth is a beautiful and logical extension of natural childbirth, and invites us to reclaim the so-called third stage of birth, and to honour the placenta, our baby’s first source of nourishment," Buckley wrote.

An image shared on Instagram in November 2015 by photographer senhoritasfotografia shows the aftermath of lotus birth: a newborn baby with its umbilical cord still attached to the placenta, which is positioned a short distance away on a white towel.

Buckley explained that cutting her first child's umbilical cord felt "strange and uncomfortable," describing the feeling "like cutting through a boneless toe." The experience so unnerved her that she decided to have a lotus birth with her second child, in 1993. After her baby was born, Buckley placed the placenta in a red velvet bag that she had sewn; the umbilical cord eventually broke apart after six days, she wrote.

During that time, she and her family rubbed the placenta with salt and lavender oil every 24 hours, noting that it developed "a slightly meaty smell" that attracted the attention of the family cat.

It is uncertain when it became common for humans to cut the umbilical cord, but one of the earliest mentions of the practice can be traced to medieval Europe, Schweizer said.

A collection of medical texts on women's health known as "The Trotula," written in southern Italy between the 12th and 15th centuries, recommended tying the cord, chanting a charm during the cutting and then wrapping the stump of cord still attached to the infant, Schweizer explained.

Early medical literature further suggested that the cord could be clamped or tied before cutting, to safeguard the fetus against excessive blood loss until the umbilical blood vessels close up, Schweizer said.

However, as early as the 18th century, physicians cautioned that tying and cutting the cord too soon could weaken the newborn, and recommended waiting until the cord ceased to pulse, Schweizer added. [Is the Baby Coming? 6 Signs of Labor]

"Today, during vaginal delivery, many practitioners wait until the cord stops pulsing, or the placenta separates into the vagina," he told Live Science. But during C-section births, the cord is frequently clamped immediately, so the practitioner can remove the newborn away from the site of the surgery, and attend to the repair of the mother's uterus, he said.

Is there any advantage to holding off on cutting the cord? Yes — up to a point. Recent studies have suggested that delaying clamping by 30 to 60 seconds after the baby is delivered can be beneficial to infants, according to an assessment published online in January by the American College of Obstetricians and Gynecologists' Committee on Obstetric Practice.

The committee found that postponing clamping for those crucial seconds raised newborns' hemoglobin levels and improved iron reserves for the baby's first months, "which may have a favorable effect on developmental outcomes," the authors wrote. In infants born prematurely, a short delay before cord clamping carried the additional benefits of improving blood circulation and decreasing the need for transfusions, the authors added.

However, waiting to cut the umbilical cord for 60 seconds is quite a different scenario than leaving the cord to dry up and fall off on its own, Schweizer told Live Science.

Once the blood is transferred to the baby — which is completed when the cord naturally collapses — "there is no documented medical value" in waiting any longer, he said.

Still, some new parents view the post-birth placenta with reverence and incorporate it into rituals and ceremonies, according to a study published in January 2014 in The Journal of Perinatal Education.

They may opt for prolonging their contact with the placenta through lotus birth, burying it in a special location, and even consuming it, Emily Burns, a postdoctoral candidate with the Religion and Society Research Cluster at Western Sydney University, wrote in the study.

Concerns over increasing numbers of lotus births reported in the United Kingdom in 2008 prompted the Royal College of Obstetricians and Gynaecologists (RCOG) there to issue a statement saying that "no research exists on lotus births and there is currently no medical evidence that it is of benefit to the baby."

In the statement, RCOG representatives also warned against keeping a newborn attached to dead tissue, which is likely to breed harmful bacteria.

"If left for a period of time after the birth, there is a risk of infection in the placenta, which can consequently spread to the baby," Dr. Patrick O'Brien, spokesperson for the RCOG, said in the statement.