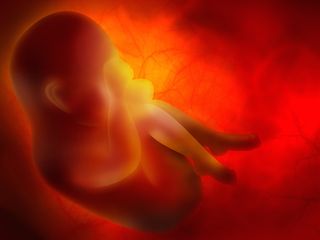 Women may believe that eating the placenta after childbirth, or taking pills made from a dried-out version of this organ that nourishes the fetus, can help with problems such as postpartum depression and breast-feeding difficulties. However, there's no scientific evidence to support these claims, according to a new review of previous studies.

Interest in consuming placenta (also called the afterbirth) has perhaps been spurred by celebrities who tout the benefits of the practice, researchers said.

"Yummy...PLACENTA pills!" Kourtney Kardashian wrote in an Instagram post on Jan. 10. "No joke...I will be sad when my placenta pills run out. They are life changing!"

Some women eat the placenta raw, others may dry out the organ or cook it. There are companies that will take the placenta and process it into capsules, and also instructions online for women who want to do this themselves.

In the new review, researchers found that the "the primary motivation for most women for consuming placenta is to prevent postpartum depression," said study co-author Cynthia Coyle, a clinical psychologist at Northwestern University Feinberg School of Medicine in Chicago. "But are women making the choice to do this, and forgoing other scientifically proven treatments? We don't know the answer to that."

There is some evidence from animal studies that for mice, eating placenta could reduce pain during labor or delivery, Coyle said. But there's no evidence that it works the same way in women, and most women don't consume placenta for this reason anyway, Coyle said. [Poop Sausage to Pee Drinks: 7 Gross 'Human Foods']

Some women may take placenta pills for cosmetic reasons, thinking that the pills will tighten aging skin or help with regulating hormones during menopause, according to the review.

The researchers used Google Trends to gauge interest in the topic, and found there was a huge surge in people searching for information about the topic in recent years, Coyle told Live Science.

The study did not look at how many women are interested in placenta eating, Coyle said. But in the discussions she had with patients and doctors while she was working on the study, she was surprised at how many women were aware of the trend and were considering eating placenta, she said. "It was much more prevalent that we thought," she said.

Her discussions with women also lead her to think that women may perceive the placenta as being a natural substance, and may think that therefore, it could not be harmful, she said. But chemical elements such as selenium, cadmium, mercury and lead, as well as bacteria, have been found in placental tissues, according to the review. And women who buy placenta pills online should know that there are no regulations about what is in the pills, Coyle said.

"The bottom line is that there are no human studies that show a benefit to eating the placenta," Coyle said.

Women are generally careful about what they consume when they are pregnant or breast-feeding — for example, many avoid alcohol and raw fish during pregnancy, she said. But with placenta pills, it's not possible to know exactly what is in them.

Women who are concerned about postpartum depression, or think they may have the condition, should talk with their doctor, Coyle said.