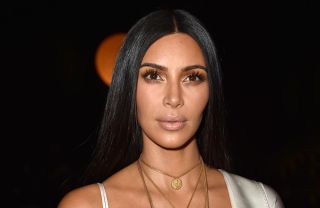 Kim Kardashian wants to have a third baby.

"I'm going to try to have one more baby," Kardashian says in a new promo for an upcoming episode of "Keeping Up with the Kardashians."

But a third baby could be very risky for the reality TV star, who revealed in an episode last fall that she had experienced a serious complication involving her placenta during both of her first two pregnancies. [9 Uncommon Conditions That Pregnancy May Bring]

"I want my kids to have siblings, but the doctors don't feel like it's safe for me," Kardashian says in the new clip.

"I don't want you to do something that would put you in danger," Kardashian's mom, Kris Jenner, says.

During her first two pregnancies, Kardashian had a condition called placenta accreta, according to People magazine. Having the condition can increase a woman's risk of having it again, according to the Mayo Clinic.

Placenta accreta affects 1 in 533 pregnancies, according to a 2005 study. It belongs to a group of conditions broadly called "retained placenta," which means that the placenta isn't delivered from the woman's body as it normally would be, within 1 hour of the baby's birth, according to the World Health Organization. In placenta accreta, not only does the placenta not come out of the uterus as it should, but the placental tissues actually grow deeper into the uterine wall than they do normally. In any case, when the placenta isn't delivered, it can put a woman at risk for serious, and even deadly, bleeding, according to the American Congress of Obstetricians and Gynecologists (ACOG). Up to 7 percent of women with the condition die, and death can occur even when women and their doctors took all of the necessary precautions, ACOG says.

Because of the risks associated with placenta accreta, if doctors suspect that a woman has the condition, ACOG generally recommends that the pregnancy be monitored closely, that the woman deliver the baby via cesarean section, and then, during the same operation, have the uterus removed. Once the uterus has been removed, a woman can no longer get pregnant.

ACOG notes that for women who do not want to have their uterus removed because they would like to get pregnant in the future, it's important that doctors go over the risks of future pregnancies. The end results can be "unpredictable," and there is an increased risk of serious complications during future pregnancies, ACOG says. These risks include miscarriage, premature birth and a reoccurrence of placenta accreta, according to the Mayo Clinic.

A 2007 study from France, for example, included 26 women who opted to try to keep their uterus after placenta accreta. A few wound up needing surgery anyway, and most of the 21 women who were able to keep their uteruses still required serious treatments, including blood transfusions and procedures to stop the bleeding. In addition, the study found that just three of the women went on to have successful future pregnancies.