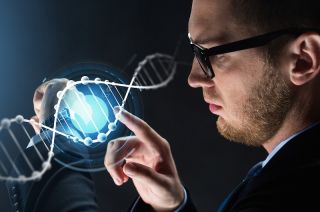 A new study finds 52 genes that are related to intelligence — a rousing success in a field that has often struggled to find correlations between smarts and genes.

The 52 genes, though, account for only about 5 percent of the variation in intelligence scores among different people. That's because intelligence is a complex trait, said study author Danielle Posthuma, a statistical geneticist at Vrije University in Amsterdam.

These genes "are basically a tip of the iceberg," Posthuma told Live Science. "But there are still a lot more genes that are important for intelligence."

Precisely because the genetic underpinnings of intelligence are so complex, previous studies on the topic turned out to be underpowered — most did not include enough people to detect the correlations between any given gene and people's scores on intelligence tests.

Those earlier studies were too small because, prior to them, researchers "didn't know what the genetic architecture of intelligence would be," Posthuma said. She added, "If it had been one or two genes, we would have been able to detect them" with the sample sizes that those studies included.

Instead, those early findings suggested that intelligence probably involves thousands of genes. Various studies show that intelligence is highly heritable: Between 40 percent and 80 percent of the variations in intelligence among people are attributable to genes. In the new study, the researchers put the heritability factor at 54 percent.

The researchers pulled together data from 78,308 people, all of European descent, and scanned their DNA for single-nucleotide polymorphisms, or SNPs. SNPs are variations in the nucleotides that make up the genome. Most, according to the National Library of Medicine, have no effect, but some are crucial to health. [7 Diseases You Can Learn About from a Genetic Test]

Twelve of the 52 genes the researchers ended up pinpointing had been previously associated with intelligence, the researchers reported May 22 in the journal Nature Genetics. One set of genes involved with intelligence, which is also involved in cell development, included three genes already known to be involved with building or maintaining neurons: SHANK3, which is involved in the formation of the synapses, or gaps between neurons; DCC, which is involved in guiding the growth of axons, the spindly projections that neurons use as communication wires; and ZRHX3, which regulates the differentiation of neurons from other cell types during development.

What the genes mean

To avoid stumbling on false correlations in the giant data set — there are at least 3 million SNPs in a human genome, Posthuma said — the researchers set their standards high in running their analysis. The result of this was that for each gene they identified, the chance that it is not truly linked to intelligence is about 1 in a million, Posthuma said.

The researchers also replicated their findings on another data set that measured the highest level of education attained instead of looking at general intelligence. IQ is highly correlated with educational attainment, so genes that drive IQ should also be linked to education, they reasoned. The researchers found that almost all of the variations they uncovered were also associated with the participants' education levels.

"This is really important stuff," said Douglas Detterman, a psychologist at Case Western Reserve University and a prominent intelligence researcher.

"What is interesting about this particular article is, it suggests what we have to do to really understand intelligence. It's not going to be easy," Detterman said. "They suggest that the things they are finding are mostly implicated in neural development, so we'll have to understand neural development and what it is about the brain that makes people smart."

Not everyone agrees that studies like these can shed much light on what makes people smart, though. [6 Foods That Are Good For Your Brain]

"The basic premise is that each gene operates to do something in particular, independent of the environment and all the other genes," said Wendy Johnson, a psychologist at The University of Edinburgh. "There is so much evidence that there are many, many problems with this, that I'm not even sure where to start."

Focusing on development and the modeling of the dynamics of the gene-environment system would be more enlightening, Johnson said.

Detterman said the natural next step in this line of work is to push the sample sizes of genome-wide studies into the millions.

"That is what it's going to take to get really good information," he said.

Posthuma and her colleagues are already planning to include more people in their next studies, hoping to find genes with even smaller contributions to general intelligence. They also plan to look more closely at the genes they've already uncovered, to see what they do, and if they really are involved with intelligence — and, hopefully, to discover what makes someone intelligent in the first place. [5 Experts Answer: Can Your IQ Change Over Time?]

"The genes have a certain function, so it will help us get an idea of the underlying biological mechanism," Posthuma said. "Why do people with different intelligence differ from one another? Are the cells behaving different, or is the information processing faster?"