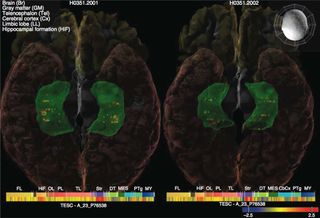 Brain size and smarts are, to some extent, genetic — and now, a team of more than 200 researchers has uncovered specific genes that are linked to both brain volume and IQ.

Though scientists have suggested bigger brains are "smarter," this study is the strongest case yet for a genetic connection to brain size and to IQ. Of course, brain size is not 100 percent correlated with a person's intelligence, and other factors, including connections between brain cells and even a person's experiences, play roles.

"We found fairly unequivocal proof supporting a genetic link to brain function and intelligence. For the first time, we have watertight evidence of how these genes affect the brain," said lead researcher Paul Thompson, a neurologist at the University of California, Los Angeles, School of Medicine.

The international research team pooled brain scans and genetic data from around the world as part of a collaboration known as ENIGMA (Enhancing Neuro Imaging Genetics through Meta-Analysis). They scoured the data for single genes that influence disease risk as well as for genes linked to brain-tissue atrophy and brain size, said lead researcher Paul Thompson, a neurologist at the University of California, Los Angeles, School of Medicine.

"Our individual centers couldn't review enough brain scans to obtain definitive results," Thompson said in a statement. "By sharing our data with Project ENIGMA, we created a sample large enough to reveal clear patterns in genetic variation and show how these changes physically alter the brain."

The genetics of brain size

With data from 21,151 people, the researchers were able to link specific genes to variations in brain size. Brains shrink naturally with age, but size is important in a number of mental ailments. Decreased brain volume marks disorders including Alzheimer's disease, depression and schizophrenia, the researchers report today (April 15) in the journal Nature Genetics. [10 Controversial Psychiatric Disorders]

For example, the hippocampus is the part of the brain linked to memory formation and organization. A gene sequence called rs7294919 on chromosome 12 is linked to variations in hippocampus volume: Every instance of a genetic variant called a T-allele in this region was linked to lower hippocampus volume equivalent to 3.9 years of aging. (DNA is made up of four bases — A, C, T and G.)

This location on the chromosome (a threadlike structure that holds a DNA molecule) occurred between genes associated with the regulation of cell death and with cellular brain development and the cleaning up of proteins, including tau, which becomes defective in Alzheimer's disease.

Another notable genetic sequence, located within the HMGA2 gene on chromosome 12, was linked with intracranial volume — in other words, the space inside your skull that marks the outer limit as to how big your brain can get. At this spot, every C-allele variant was linked to not only lower intracranial volume, but also to lower IQ scores on the Multidimensional Aptitude Battery, a measure of intelligence.

"This is a really exciting discovery: that a single letter change leads to a bigger brain," said Thompson.

Going forward, Thompson said, researchers could start to figure out how to mediate these genes' influences on the brain. The genes influence brains across a wide subset of people (mostly of European descent) from North America, Europe and Australia. That means that drug therapies targeting these genes could have broad applications.

The researchers now plan to tackle the genes that influence the brain's wiring, hoping to unravel the secrets of connectivity-related disorders such as autism.