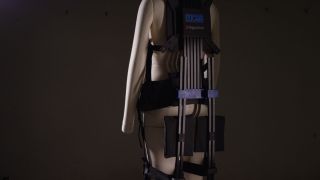 Employees at a Lowe's hardware store in Christiansburg, Virginia, recently channeled Ellen Ripley in the 1986 movie "Aliens," as they donned mechanical exoskeletons to help them lift and move heavy objects.

The wearable robotic suits — which are significantly lighter and less cumbersome than the forklift with legs that Ripley wore to defeat the xenomorph queen — were developed in partnership with the Assistive Robotics Laboratory at Virginia Tech College of Engineering and Lowe's Innovation Labs. They were designed to reduce fatigue in the workplace caused by transporting oversize and bulky products, Virginia Tech representatives said in a statement.

The suit is worn over regular clothes, encircling the wearer over the shoulders, and around the chest, waist and thigs. Carbon fiber in the back and legs of the exosuit store energy when the users bend down. That energy is then fed back as the users straighten up, much as a stretched bowstring transmits energy when released, to send an arrow flying. This means that a person wearing the robotic suit needs to exert less effort to accomplish certain labor-intensive tasks, such as lifting and carrying a bag of concrete.

In-store tests with Lowe's employees provided an exciting — and rare — chance for the suit's engineers to connect directly with users and see its real-world applications as it was being developed, co-designer Taylor Pesek, a master's degree candidate in mechanical engineering at Virginia Tech, said in a statement.

"Projects such as the Lowe's exosuit really provide an opportunity for engineers who sit behind desks most of the time to really reach out and help other people," Pesek said.

"My background was in robotics, where the technology was incredible, but still years away from showing up in everyday life," he said. "The exciting thing about this exosuit is that it will already be directly assisting people as it's being developed."

Lowe's officials will track the performance of the suits to determine the best course for expanding their use into more locations. The Virginia Tech team, meanwhile, will continue to explore other applications for the wearable lift-assisting technology.