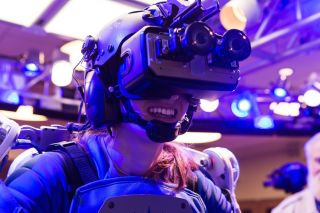 I experienced each of these maladies one at a time. But many older people have multiple conditions, meaning an older person might have to simultaneously deal with a bad hip and cataracts, or tinnitus and macular degeneration. Wearing the suit was fun, but I enjoyed taking it off and being able to move around without worrying about my balance, vision or hearing. If anything, this made me think about what conditions I might develop in the future, and how I could take care of myself so I don't get some of the preventable ones, such as tinnitus. Credit: Patrick MacLeod
(Image: © Patrick MacLeod)

They say that youth is wasted on the young, but I'd like to amend that. It's wasted on young people who haven't tried on the R70i robotic aging suit.

Last week, scientists strapped me into the 40-lb. (18 kilograms) Iron Man-like suit. But instead of acquiring superpowers, I became an 80-year-old, aging about 50 years in 5 seconds. Cataracts clouded my vision, a ringing whine filled my ears and I limped along with a bad hip.

After stepping out of the suit, I started thinking about old age. Could eating better or exercising more stave off its impending arthritic aches and slowness? The experience also triggered empathy — I vowed to stop mindlessly walking so fast with my older relatives. [See Photos of Our Live Science Reporter in the Robotic Suit]

Bran Ferren, the co-founder and chief creative officer of Applied Minds, the company that created the suit, said he hopes the suit will help spark conversations about old age and increase compassion.

"Research shows that people have an aversion to even talking about getting older," Ferren said.

The concept for R70i began with the Virginia-based insurance company Genworth, which requires sensitivity training for its employees to help them interact their older customers, said Janice Luvera, Genworth's chief marketing officer. One day, a Genworth attorney suggested that they develop an immersive training experience "so that people could start to understand what it's like to age," Luvera told Live Science.

Genworth approached Applied Minds, and within four months, they had created the R70i aging suit. It debuted in January at CES 2016, the massive consumer technology conference in Las Vegas. Reuters listed the suit as one of the best gadgets at CES, and Vocativ called it a "blue, robotic love child of C-3PO and Iron Man."

I encountered R70i at Liberty Science Center in New Jersey, where visitors can try on the suit until Sunday (April 10). The suit will likely travel more, but its schedule isn't set yet, Ferren said.

I was nervous, but also curious. Would I be able to overcome the suit's simulated effect of aphasia, when you can think clearly but have difficulty communicating verbally?

I put on the blue R70i pants and shirt (made out of breathable, high-performance sports fabric), and the suit's engineers strapped the robotic exoskeleton onto my arms and legs, and secured a helmet that covered my eyes and ears.

It was heavy, largely because of the lithium-ion phosphate batteries and the cooling system in the backpack, but I stiffly plodded out of the dressing room.

Ferren greeted me, explaining that the suit would muddle my senses and weigh me down. But in real life, older people often slow down because of pain and stiffness, not because their exoskeleton has added resistance at the joints. [8 Tips for Healthy Aging]

Cameras in the suit simulated a case of end-stage glaucoma. It felt like I was looking through a tunnel; I couldn't see the outer edges of the world, but rather only directly in front of me. This was the opposite effect of the age-related macular degeneration simulation, which completely clouded my central vision but allowed me to see the periphery.

It was startling. I don't even wear glasses. Either of these conditions would pretty much stop me from reading, driving or navigating New York's busy streets.

At least cataracts, which were simulated by a "crystalline lens" that made my vision so fuzzy that I couldn't even see out of my right eye, can be surgically removed, or prevented by wearing ultraviolet protective sunglasses.

I found tinnitus — a constant ringing in the ears — jarring. (Ferren, who has tinnitus, advised me not to listen to too much blasting music, as he did.)

And, despite my efforts, aphasia got the best of me. Ferren cheerfully told me I sounded drunk when I recited "Mary Had a Little Lamb." (Aphasia is actually a neurological condition, but R70i mimics its effects by delaying the sound of your voice, so you hear it a split second after you speak.)

Then, he turned up the resistance of the R70i exoskeleton and asked me to pretend I was using my hands to climb a rope. Talk about a workout — this was harder than lifting weights.

Older people may find it hard to move because of conditions like arthritis. The exercise made me think of my grandpa, who put foam hair curlers around his charcoal pencils so that he could still draw after arthritis twisted his fingers.

Finally, Ferren led me to the treadmill, where he gave me two bad legs and bad hips. The lights on the R70i leg joints glowed red (a sign of increased resistance). It was such an effort to walk. I hunched over and had to grab the handlebars for support. [7 Ways the Mind and Body Change with Age]

This made the transformation complete: I had turned into an old lady of about 80. But I experienced each condition separately, and can only imagine what it's like to have glaucoma, tinnitus, arthritis and a bad hip at the same time. I just hope that my younger friends won't leave me behind while I shuffle along.

"We view old people as annoying and ornery," Ferren said. "Well, if you felt like that all day long, you might be ornery too."

After I took off the suit, I felt incredibly light and lithe. And, as cliché as it may be, it made me appreciate my youth. The suit could also train doctors and caregivers, or increase understanding between parents and children, Ferren added.

"It's designed to create empathy and understanding of what these issues are," he said. There's just one caveat: You have to be between about 5 feet 3 inches and 6 feet 3 inches (1.6 to 1.9 meters) to wear the suit.