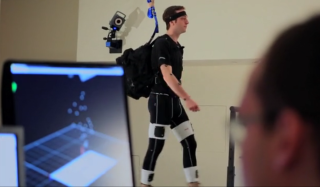 Carrying 100 pounds of stuff on your back is hard for a human, but for a robot? Not so much.

Bearing this in mind, researchers at Harvard University are developing a robotic suit that makes carrying heavy loads easier for soldiers, who sometimes have to lug around more than 100 pounds (45 kilograms) of gear and equipment when on patrol. The robotic exosuitcould also be modified to assist people with physical disabilities, the researchers said.

The programmable suit acts in parallel with the body's muscles and tendons, mimicking the way these body parts move, according to Conor Walsh, an assistant professor at Harvard's Wyss Institute for Biologically Inspired Engineering. [Bionic Humans: Top 10 Technologies]

"Human walking is so efficient, in part, because it's a passive-dynamic process where the body and legs have a pendulum-like motion," Walsh said in a video about the Harvard team's Soft Exosuit. "The purpose of muscles is to inject impulses, or bursts of energy, at the right time in order to maintain this motion."

By mimicking these muscle movements, the robotic suit serves to make the walking process even more efficient. Made from smart textile materials and sensors, the suit gives the wearer the extra support needed to carry heavy loads for extended periods of time.

"While the idea of a wearable robot is not new, our design approach certainly is," Walsh said in a statement. Traditional exoskeleton systems are plagued by problems, such as power-hungry battery packs and rigid parts that interfered with natural joint movement, he added.

In contrast, the Soft Exosuit is simply worn like a regular pair of pants under a soldier's uniformand gear. The current prototype of the suit is a web of straps that are positioned around the wearer's lower body. The straps feature a network of sensors that serve as the exosuit's "brain" or "nervous system," and are controlled by a low-power microprocessor, the researchers said.

"Batteries and motors are mounted at the waist, and then we use cables to transmit forces to the joints," Walsh said in a video about the exosuit.

The suit's sensors continuously monitor the wearer's movements, communicating information about the amount of tension on certain parts of the leg and what position the wearer is in (e.g., walking, running or crouched). These details dictate how much force is needed in a particular joint area, as well as when exactly that force is most needed.

Walsh and his colleagues are developing the exosuit for the Defense Advanced Research Project Agency, or DARPA, which hopes to adapt the technology for its Warrior Web program. The goal of Warrior Web is to create technologies that will prevent and reduce musculoskeletal injuries in solders. The increased weight a soldier must bear when lugging around heavy equipment makes their joint areas, such as the ankles and knees, more susceptible to injury, according to DARPA.

In addition to its work with DARPA, the Harvard team is also working with partners in the medical industry to develop a version of the exosuit that could one day be used to help civilians. In particular, the researchers said the exosuit could help stroke patients regain the ability to walk.