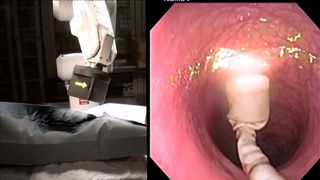 The image on the left shows external robotic arm which moves above the body to guide the internal capsule, which is shown in the image on the right inside the pig colon.
(Image: © Courtesy of the Science and Technology of Robotics in Medicine (STORM) Lab)

CHICAGO — In the future, robots may perform your colonoscopy: Scientists have developed a robot that can perform complex colonoscopy maneuvers in experiments on pigs.

Dr. Keith Obstein, the lead author of a new report on the robot and an associate professor of medicine at Vanderbilt University Medical Center in Tennessee, said the researchers hope to test the robot in humans by the end of 2018.

Colonoscopies are used in part to screen people for colon cancer, said Obstein, who presented his findings here today (May 8), at Digestive Disease Week, a scientific meeting focused on digestive diseases. While colonoscopies save lives, many people still skip them, possibly due to fears of the procedure or the possibility of side effects, Obstein said at a news conference in advance of his presentation. [Super-Intelligent Machines: 7 Robotic Futures]

Normally, during a colonoscopy, a tube with a camera is inserted into the colon so that doctors can look for precancerous polyps and any other abnormalities. If they find anything, the doctors can also use tools, including snares and clips, to remove polyps during the procedure.

The robotic version of the procedure involves two magnetic components: an internal capsule which has both a camera and tail through which doctors can use tools, and an external robotic arm, Obstein said. The robotic arm moves around above the body — it doesn't touch the skin — but in doing so, it magnetically pulls the internal capsule through the colon, he said.

Obstein and his team also programmed the robotic arm to autonomously perform a complex maneuver in the colon called "retroflexion." During this maneuver, the colonoscope is turned around so the clinician can get a reverse view of the colon, he said. [Colon Cleansing: 7 Myths Busted]

In the study, the robotic arm successfully performed retroflexion 30 times in a pig colon. If doctors can someday use the robotic system in humans, it could free up the clinicians to spend more time looking at the colon and searching for abnormalities, because they wouldn't have to also maneuver the colonoscope, he said.