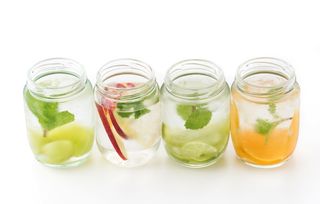 Whether they're buying products or seeing an alternative medicine practitioner, some people are emptying out their colons in hopes of improving their health.

Some are using do-it-yourself colon cleansing methods — such as laxatives, enemas or herbal remedies — while others are undergoing colonic irrigation (also known as colonic hydrotherapy, or colonics) and allowing gallons of water to be flushed through a tube into their rectum, to purportedly remove harmful toxins and eliminate old fecal material from their bodies.

Although ads for colon cleansing products and services suggest they help strengthen the immune system, enhance well-being and aid weight loss through "detoxification," there isn't much science to back up these claims.

"I have yet to see a well-designed study on colon cleansing in a reputable medical journal to support its health claims," said Dr. Ranit Mishori, an associate professor of family medicine at Georgetown University School of Medicine in Washington, D.C.

And there's definitely the potential for harm, especially with colonic hydrotherapy, Mishori added.

In 2011, Mishori published a paper in The Journal of Family Practice, warning physicians about the possible side effects of colon cleansing, after she observed these dangers in two patients at her hospital and reviewed other case reports in the scientific literature.

Mishori thinks cleanses are popular because they are marketed well — with the idea that the regimens can get the bad stuff out of the body, and leave the good stuff behind. Psychologically, a cleanse may also expel some of the issues a person is struggling to overcome, such as weighing too much or feeling unwell, she said. [9 Healthy Habits You Can Do in 1 Minute (Or Less)

Mishori does not oppose the use of complementary medicine (Mishori teaches mind-body medicine as well as meditation classes), but she said she's troubled by claims about colon cleansing that are not substantiated by science.

Live Science asked Mishori for her take on the seven health claims often made about colon cleansing practices.

Claim: Cleansing pulls toxins out of the blood.

"The body has two major organs whose job it is to neutralize toxins," Mishori said. One is the liver, and the other is the kidneys.

The body is built to make all of this happen naturally, so there's little that people need to do to enhance how these organs work, she said.

Claim: Cleansing washes away the stool that accumulates and attaches to the lining of the colon, causing a toxic waste buildup.

Cleansing enthusiasts suggest that old stool can stick to the colon walls and harden, causing the release of toxins that can lead to a wide array of health problems, from bloating and fatigue to depression and achy joints.

"These claims make no physiological sense at all," Mishori said. The cells that form the lining of the colon are shed every 72 hours, she noted. This cell turnover means stool doesn't stick to intestinal walls, and so-called toxins don't build up in the colon and get released into the bloodstream, as cleansing proponents contend.

"Other than staying healthy or reducing stress, it's not exactly clear how people can enhance their immunity," Mishori said.

Therefore, she's not sure how cleansing the colon could enhance the production of the intricate components of the immune system, which includes white blood cells, proteins such as antibodies, and tissues and organs.

Some cleansing products promote the fact that they include vitamins, minerals, herbal extracts or probiotics, and claim that these components support the immune system. However, there's little evidence that these formulations are actually effective in boosting immunity, Mishori said.

By the time food gets into the colon, most of the nutrients have been absorbed into the body, through the small intestine. What's left in the colon is mostly waste products, water, and some vitamins and minerals, Mishori said.

The body is very smart, and it has created a mechanism for waste products to be eliminated that doesn't need to be enhanced, Mishori said. "That's why we have pee and poop."

Marketers of colon cleansing products or services don't specify exactly which toxins a cleanse supposedly removes from the body. If those toxins were named, then studies could determine if their levels actually change after the colon is emptied out. [5 Experts Answer: Is There Such Thing as a Healthy Juice Cleanse?]

In addition, Mishori said, some cleanses may kill the good bacteria found in the colon along with the bad, which is counterproductive and might even weaken immunity.

Cleansing regimens might induce diarrhea or cause a person to pee more, Mishori said. But the pounds lost by these methods are water weight and stool, which means the weight loss won't last, she said.

This loss of water and stool can also mean dehydration and a loss of important electrolytes, such as sodium and potassium, she noted.

Colon cleansing enthusiasts suggest that, after a cleanse, skin will look smooth and glowing because the colon will now be functioning more effectively, which means the body will remove "toxins" through the colon rather than through the skin. But Mishori said there's no evidence to support these theories.

Claim: The body sheds excess, creating energy as it restores clarity and radiance.

Supporters of cleansing suggest that the release of toxins from the body frees up energy that would have been used on digestion and eliminating waste, and diverts that energy to other areas of the body to promote health and healing. But there is no data to back up these ideas.

After doing a colon cleanse, people often use words such as "lighter," "clearer thinking" and "more energetic" to describe its effects.

When asked why cleansing may rejuvenate people, Mishori said, "Don't discount the placebo effect," along with the fact that they've likely stopped some of their unhealthy habits for a few days.