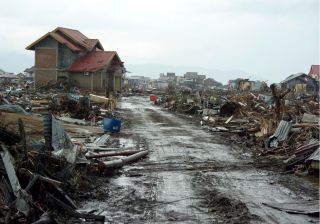 In 2011, the seafloor jolted and sent waves up to 133 feet (41 meters) high over parts of Japan. In 2004, the entire planet vibrated as an undersea quake near Sumatra pushed tsunamis over coastlines across the Indian Ocean. In 2016, a magnitude-7.8 earthquake ruptured multiple faults near Kaikoura, New Zealand, in what seismologists say could be the most complicated earthquake on record.

What do all these events have in common? They happened in subduction zones — and in every case, the Earth did something scientists absolutely did not expect.

Subduction zones are regions where one tectonic plate grinds under another like an enormous conveyer belt. It's elementary-level knowledge that these massive forces give rise to earthquakes and volcanism, and most people who live in subduction zones are at least intellectually aware that the ground beneath them could start shifting at any moment. [The 10 Biggest Earthquakes in History]

But researchers can't predict when big quakes will happen, or where. They can't explain the subterranean plumbing of volcanic systems, or how earthquakes and volcanic eruptions are related. They're consistently surprised by megaquakes that rupture areas larger than they thought possible or in places they never predicted.

In an effort to delve into these questions, seismologists and volcanologists are now taking a cue from physicists and astronomers: They're banding together. A new effort called the SZ4D Initiative aims to pull together researchers to get measurements of subduction zones that no one lab could achieve on its own. Where physicists have particle accelerators and astronomers have observatories, seismologists hope to deploy massive networks of monitors to observe the entire lifecycle of massive earthquakes and volcanic eruptions. At the annual meeting of the Seismological Society of America in Denver in April, Live Science spoke with Diego Melgar, a seismologist at Berkeley Seismological Laboratory, about why this initiative is sorely needed.

Live Science: Why don't we know enough about big seismic and volcanic events?

Diego Melgar: Big events, be they earthquakes, tsunamis, volcanoes, are comparatively rare. When you think about hurricanes or tornadoes, there is a season for them every year, but big, damaging things associated with subduction zones — they're rare.

We've really only had seismometers for 120 years. In those 120 years, we've seen a lot, but we still haven't seen what a tropical meteorologist sees in one season. So we still are surprised, often, when a big event happens. We're like, "Oh, I didn't know that could happen."

Live Science: What surprises you? In a subduction zone, there are going to be earthquakes and volcanoes.

Melgar: Every scientist you ask would probably have a different answer! Personally, what still surprises me is just the dimensions of these things. When you think of the Sumatra earthquake in 2004, the length of the fault that ruptured was 1,000 kilometers — you know, 600 miles. It took almost 10 minutes. We're puny humans. That still sort of boggles the mind.

Another thing that is surprising is the particularities of their behavior. They can break all the way to the surface of the Earth, and that's what creates these big, giant tsunamis. The relative movement between the two sides of the fault in Japan in 2011 was almost 200 feet [61 m]. It's kind of impressive.

Live Science: Why do those particularities matter?

Melgar: How an earthquake breaks, where it breaks, etcetera, dictates how strong the shaking will be, where that strong shaking will be and how big the tsunami will be. Population growth in coastal areas is growing, so we are growing into areas of high hazard. In many cases, communities are either unaware of that hazard, or planning building codes and making resilient societies is more or less an afterthought, because urban planning in many parts of the world is not really a priority. Understanding where these big earthquakes can happen and what they are going to look like is a foundation to inform societies of how they should plan for the next century, for the next two centuries. [Waves of Destruction: The Biggest Tsunamis in History]

Melgar: Earthquakes at subduction zones happen mostly offshore. Most of our instruments are on land. We need instruments on the seafloor.

Deploying things on the seafloor is A, very expensive and B, technologically challenging. It's like going to the moon. But everybody more or less agrees we need to go there to solve these problems.

Live Science: How is the SZ4D Initiative going to further that goal?

Everyone is working really on the same problem, but from very different angles, and not always communicating with each other. We're trying to build more of a consensus of what we should do.

The other big challenge here is that it's expensive.

Live Science: How would you fund something like a seafloor seismic network?

Melgar: This is particularly focused on the National Science Foundation. NSF cares about basic science, but there are many parallel efforts that could be — to use a hackneyed word — synergistic. The early warning programs, like ShakeAlert on the West Coast, obviously have some bearing on this. There are also efforts to do tsunami warning in the Pacific Northwest through the National Oceanic and Atmospheric Administration [NOAA] and NASA.

In Japan, they have this thing called S-net. It's a fiber-optic cable on the seafloor, basically what we would like to have. It spans thousands of kilometers of the islands and it cost them around $400 to $500 million. I don't think NSF alone has the budget for that. [NSF's total annual budget for all basic research funding in 2016 was $7.4 billion.]

There is a lot of push and pull in the community right now. If we don't want to do this for early warning, if it's for basic science, then we don't really need real-time monitoring. That makes things cheaper.

Live Science: How is the current political climate with regard to federal research funding affecting this effort?

Melgar: That's a big one. Just the general atmosphere of devaluing facts and rational argumentation over more emotional arguments is making everyone uneasy. In other parts of Earth science, the impacts are already quite severe. If you work on climate change, on atmospheric science, on the cryosphere [the dynamics of ice in the Earth system], you are already seeing the impact in terms of dollars and cents. For us, it is not yet clear, but I don't think anybody is hopeful the budgets will go up.