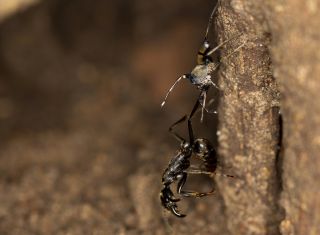 A jumping spider attacks an injured ant as it attempts to return from the hunting ground to the nest. When nest mates carry their injured comrades home, they are much less likely to die.
(Image: © Frank et al./Sci. Adv. 2017;3:e1602187)

Hunting ants in Africa march off to raid termite nests with military precision. Now, new research finds that these ants are truly a band of brothers. They even rescue their wounded comrades.

These ant rescues aren't really selfless, researchers reported today (April 12) in the journal Science Advances. Without the fallen ants, colony sizes would probably be nearly a third smaller, because injured ants frequently die if they're not helped home.

"People always think that for ants or social insects, everything they do is for the good of the colony," said Erik Frank, a doctoral student at the University of Würzburg, in Germany, who led the research. Biologists typically downplay the importance of the individual insect, Frank told Live Science. [See Photos of Zombie Ants]

"Here we show, for the first time, an example where the good of the individual, of saving an individual ant, is good for the colony as well," Frank said.

Ants to the rescue!

Megaponera analis ants live in sub-Saharan Africa and eat termites — only termites. Multiple times a day, an ant scout will come across a foraging band of termites and rush back to its nest, recruiting as many as 500 ants to march to the termites and attack. The ants then carry the termite corpses back to the nest to feast. [Ancient Termite-Ant Warfare Locked in Amber]

But Frank noticed that some of the ants carried not dead termites, but living ants, back to the nest. Upon closer inspection, he realized that these ants were wounded. Some had lost a leg or an antenna, while others had an angry termite or two clinging to their bodies.

"What's the benefit?" Frank wondered. "Why were they even doing this?"

To find out, Frank first chose 20 random injured ants and forced them to return alone from the hunting site to their nest, without the benefit of help from their brethren. He found that 32 percent of the injured ants died on the journey. More than half (57 percent) of the injured ants that were killed were ambushed by jumping spiders because they couldn't move very quickly.

In comparison, only 10 percent of the healthy ants fell to predators on their marches back to the nest, and Frank never saw a carried ant get attacked in 420 raids.

For an injured ant, it was clearly beneficial to get rescued.

"But this is not the reason this behavior has evolved," Frank said. "It obviously needs to benefit the colony as a whole."

For the good of the group

And it does benefit the whole colony, Frank found. By marking injured ants with acrylic paint, Frank was able to track them in subsequent raids. He found that 95 percent of the time, the once-wounded ants returned to battle. In fact, 21 percent of ants in raiding parties showed signs of previous injury. Frank also found that ants with termites attached to them had those termites removed when they were safely back in the nest; ants that lost a limb or antenna spent a few hours figuring out how their bodies worked. By the next day, those amputee ants could run nearly as fast as their uninjured nest mates.

In 53 observed raids, Frank saw a total of 154 ants being carried. He estimates that a typical colony rescues between nine and 15 of its injured soldiers per day. A colony of M. analis ants produces only about 13 new baby ants per day, he and his colleagues wrote, so the rescues make a major impact on the ant colony's overall population.

A computational model that the researchers developed showed that without rescue behavior, colonies would likely be around 29 percent smaller.

"Instead of being forced to replace these injured workers with new ones, they can just keep using the injured ones," Frank said.

Further investigation revealed that a substance coming from injured ants' mandibular (jaw) glands seemed to prompt the rescue behavior. The pheromones released from the gland are a mix of dimethyl disulfide and dimethyl trisulfide, the researchers found. Healthy ants smeared with these compounds were promptly picked up and "rescued" by their nest mates.

In mammals, especially humans, empathy is often used to explain heroic or helpful behavior. The pheromone discovery reveals that ants have evolved another way to prompt helpfulness.

"We have the convergent evolution of two different mechanisms with the same end goal," Frank said.