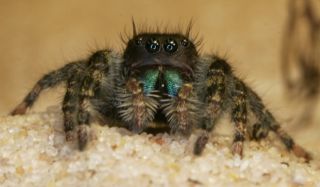 The jumping spider, famed for its excellent vision and pouncing skills, has long been an enigma to neurobiologists. The arachnid's body is filled with a pressurized liquid that helps it move, and whenever curious scientists have tried to peer into its brain with surgical instruments, the spider exploded.

Now, with a new technique, scientists have recorded the electrical brain activity of these fascinating spiders, sans kaboom.

"What we've done is open up the brain basis of a very unusual animal," said researcher Ron Hoy, a professor of neurobiology and behavior at Cornell University. [See more photos of the jumping spiders experiment]

The jumping spider (Phidippus audax) has a brain the size of a poppy seed, but vision almost on par with humans, making its visual system intriguing to researchers and robotic engineers who draw inspiration from nature.

Gil Menda, a postdoctoral researcher of neurobiology and behavior in Hoy’s lab, realized that if he made a tiny hole in the spider's head, the wound could self-heal around a tungsten-recording electrode as thin as a hair. He carefully inserted a microelectrode into the brains of 33 spiders, and watched how brain cells in their visual networks responded to pictures of white noise, flies and other jumping spiders.

He did note one small difference, however. Unlike cats, the spiders don't run after their prey. "They jump and seize their prey," Hoy said. "It's like a cat's pounce."

To keep the spiders still during the experiments, the research team created a small spider harness with a 3D printer. They covered the spiders' four back eyes, and inserted the electrode into the brain to help them look for brain cells associated with each spider's visual system. When the researchers showed the spiders an image of a fly, their natural prey, on a screen, the spiders' brain cells associated with their visual systems showed a burst of electrical activity. [See Photos of Jumping Spiders & Other Arachnids]

In Chinese, the spider's name translates to "flying tiger." But they aren't dangerous to people. "They have venom, but it's reserved for their prey," Hoy said.

"You hear a very strong [electrical] response from the brain when [the spiders] detect something that they recognize," Menda said.

To ensure the spiders weren't responding to certain parts of the fly, such as its wings or head, the researchers showed the spiders a jumbled picture of a fly. The scattered image didn't elicit a response. "They didn't respond at all to the [jumbled] pictures," Menda said. "It wasn't the small component of the picture, it was the image of the [entire] fly."

The jumping spiders also showed a neural response to the "white noise" static, but not to images of other spiders, according to the electrode recordings; it's possible that other neurons in their brains that weren't attached to the electrode showed a response to spider images, the researchers said.

Unlike humans, whose eyes detect both acuity and motion, the spider's large, primary eyes process acuity, and its small, secondary eyes see motion. Because researchers were unable to study the spiders' neural activity until now, they were unsure how the spiders' eyes worked together.

"You can imagine that you have four eyes that are all looking at the same thing, you get input one and input two, and you would add them together," speculated researcher Paul Shamble, a graduate student of neurobiology and behavior in Hoy's lab. "It turns out that for some of the neurons, that wasn't the case. It was much more complicated."

In the experiment, the researchers covered the spiders' front eyes and then their side eyes. The spiders showed little neural visual response to the images if either set of eyes was covered.

The spiders need both their large and small eyes to process visual information, the researchers found. "They need all of their eyes to detect the prey," Menda said.

The study may open a new field of basic neuroscience, Hoy said. It could also inspire engineers who build small biosensors, as jumping spiders have tiny eyes and brains.

"Those tiny [brains], with only one hundred thousand neurons, can see the same things that humans with enormous brains can see," Menda said.

The researchers also hope the study will raise awareness about the jumping spiders' precise visual and hunting abilities.

"If you just wave your hand, this is one of the few animals that will turn around and look back at you," Hoy said. "To me, that makes them endearing, and it makes me think maybe I don't want to squash that animal."

The study was published online Oct. 9 in the journal Current Biology.