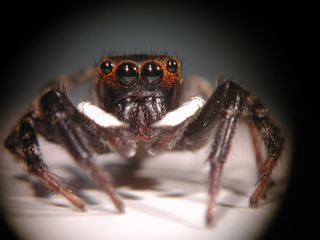 Jumping spiders, which hunt by pouncing on their prey, gauge distances to their unsuspecting meals in a way that appears to be unique in the animal kingdom, a new study finds.

The superability boils down to seeing green, the researchers found.

There are several different visual systems that organisms use to accurately and reliably judge distance and depth. Humans, for example, have binocular stereovision. Because our eyes are spaced apart, they receive visual information from different angles, which our brains use to automatically triangulate distances. Other animals, such as insects, adjust the focal length of the lenses in their eyes, or move their heads side to side to create an effect called motion parallax — nearer objects will move across their field of vision more quickly than objects farther away.

However, jumping spiders (Hasarius adansoni) lack any kind of focal adjustment system, have eyes that are too close together for binocular stereovision and don’t appear to use motion parallax while hunting. So how are these creatures able to perceive depth?

Researchers in Japan have now discovered that the arachnids accurately sense distances by comparing a blurry version of an image with a clear one, a method called image defocus.

Jumping spiders have four eyes densely packed in a row: two large principal eyes and two small lateral eyes. The spider uses its lateral eyes to sense the motion of an object, such as a fly, which it then zeros in on using its principal eyes, Akihisa Terakita, a biologist at Osaka City University in Japan and lead author of the new study, explained in an email to LiveScience.

Rather than having a single layer of photoreceptor cells, the retinas in the spider’s principal eyes have four distinct photoreceptor layers. When Terakita and his colleagues took a close look at the spider's principal eyes, they found that the two layers closest to the surface contain ultraviolet-sensitive pigments, whereas the deeper layers contain green-sensitive pigments.

However, because of the layers' respective distances from the lens of the eye, incoming green light is only focused on the deepest layer, while the other green-sensitive retinal layer receives defocused or fuzzy images. The researchers hypothesized that the spiders gauge depth cues from the amount of defocus in this fuzzy layer, which is proportional to the distance an object is to the lens of the eye.

To test this, they placed a spider and three to six fruit flies in a cylindrical plastic chamber, housed in a white styrene foam box. They then bathed the bugs in different colored lights: If the defocus of green light is important to the spiders, then they should not be able to accurately judge jumping distance in the absence of green light.

Sure enough, the spiders could easily catch the flies under green light, but consistently underestimated their jumps under red light (which doesn't contain shorter-wavelength light, such as green and blue). The researchers suggest that green light is just right to produce the image defocus necessary to gauge distances, unlike other wavelengths of light.

The team doesn’t know if any other animals employ similar depth-perception techniques, though they think the findings could have important implications for the future design of visual systems in robots.

"Further investigation of the optics, retinal structure and neural basis of depth perception in jumping spiders may provide biological inspiration for computer vision as well," they write in their study, published in the Jan. 27 issue of the journal Science.