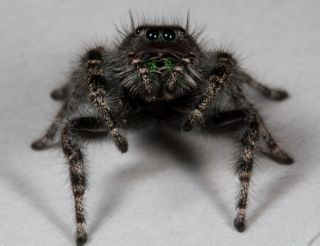 What a large number of eyes you have! The jumping spider Phidippus audex, like most spiders, sports 8 eyes.
(Image: © Elizabeth Jakob, University of Massachusetts, Amherst)

Is it their eight creepy-crawly legs or their eight beady eyes that make spiders a spooky Halloween staple? Either way, new research suggests all those extra pairs of spider peepers have their own roles to play in keeping the arachnids safe.

Jumping spiders, a group of spiders that actively hunts its prey rather than trapping it in webs, have four pairs of eyes (as do most spiders). A new study finds that while the center, or principal, pair of eyes is good at picking out details, one of the side pairs is crucial for warning spiders when something is coming their way.

This "looming response" is the equivalent of a human ducking and covering when a baseball flies toward his or her face. But humans rely on just one pair of eyes to both avoid the baseball and see the details of its stitching. Jumping spiders use four eyes for the same tasks.

"We see that division of labor within that visual system," study research Skye Long, a doctoral student at the University of Massachusetts, Amherst, told LiveScience. "That's pretty cool if you think about it, because we only have one pair of eyes."

There are more than 5,000 species of jumping spider, which Long described as the "big cats" of the arachnid world for their hunting abilities. The principal eyes of these spiders allow for sharp, color vision; the spiders can also see ultraviolet light, which is outside the spectrum of human vision, with their main eyes, Long said. [Gallery: Seriously Spooky Spiders]

The secondary eyes dotted around the spiders' heads are thought to help them detect motion, Long said, but the pair right next to the central eyes, called the anterior lateral eyes, or ALE, seem to be able to discern some detail as well. It was this pair of eyes that Long and her colleagues were interested in studying.

The researchers captured wild Phidippus audax, a species of jumping spider, and dabbed pairs of their eyes with green and orange paint, the arachnid version of a blindfold. In 16 spiders, the researchers masked the principal eyes. In 14, they covered the anterior lateral pair. Another 16 were left paint-free. (After the experiment, the researchers peeled off the paint to restore full spider vision.)

The spiders were then put into an enclosure with an iPod touch. On the screen was a black dot. When the spider was looking toward the screen, the researchers pressed play, and the dot either expanded quickly (as if it coming toward the spider) or contracted (as if receding).

If the spider could detect the motion, it would respond by backing up rapidly, usually lifting up a couple of legs in a defensive posture. [See video of a skittering spider]

But spiders with their anterior lateral eyes blocked didn't show this response, the researchers reported in the Oct. 16 issue of the journal Biology Letters.

Meanwhile, "spiders with their principal eyes blocked behave the same as spiders that don't have any paint on their eyes at all," Long said.

That means the secondary eyes are crucial for alerting the spider to dangerous motion, Long said. Spider eyes are a "really cool step in evolution," she added; insects have compound eyes with multiple lenses, and some areas of those eyes have certain functions. Spiders, on the other hand, separate out visual functions across their heads.

"This is a different pathway that evolution has taken to allow a very small animal to have a very extensive visual system," Long said.

The researchers now plan to continue investigating the roles of the secondary eyes. They're developing a spider eye-tracker so they can expose the arachnids to videos and watch where their principal eyes look.

"That gets us very deeply into how the spider is seeing the world," Long said. "As close as it can get, really."