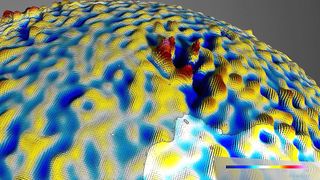 The new map of the lithospheric magnetic field. The red area shows where the field is especially strong on the city of Bangui in the Central African Republic. It's possible that a meteorite impact more than 540 million years ago led to this anomaly in the magnetic field.
(Image: © ESA/DTU Space/DLR)

Satellites have provided a detailed view of the small but vitally important magnetic signals emitted by Earth's outer shell, known as the lithosphere, the European Space Agency (ESA) said.

The satellites, three identical spacecraft collectively known as Swarm, were launched in 2013 to study's the Earth's many magnetic signals. These signals create a magnetic field that can be likened to an enormous cocoon, a shield that protects the planet from cosmic radiation and charged particles from solar wind.

The planet's molten iron core generates the majority of the magnetic field, according to ESA. The remaining 6 percent is created, in part, by electrical currents in space that surround Earth, as well as by magnetized rocks in the upper lithosphere, an area encompassing Earth's crust and upper mantle. [50 Amazing Facts About Planet Earth]

After three years of collecting data, the Swarm satellites were able to plot the highest-resolution map to date of the lithosphere's relatively weak magnetic signals.

"By combining Swarm measurements with historical data from the German CHAMP satellite, and using a new modeling technique, it was possible to extract the tiny magnetic signals of crustal magnetization," project lead researcher Nils Olsen, a professor of geomagnetism at the Technical University of Denmark, said in a statement.

"We can't simply drill through it to measure its structure, composition and history," Floberghagen said in the statement. "Measurements from space have great value, as they offer a sharp global view on the magnetic structure of our planet's rigid outer shell."

The map, presented this week at the Swarm Science Meeting in Canada, shows variations in the field with greater precision than previous satellite-made reconstructions, the researchers said.

One such anomaly was discovered around Bangui, a city in the Central African Republic. The map shows a red spike, indicating that the magnetic field there is especially sharp and strong, the researchers said.

It's anyone's guess why the lithosphere has such a strong magnetic signal under Bangui, but it's possible that the signal emanates from a meteorite that crashed into Africa more than 540 million years ago, the researchers said.

The team also pointed out that Earth's magnetic field is constantly changing: Its magnetic north is known to wander, and the planet's polarity flips every couple of hundred thousand years. Researchers can figure out when these flips happened by determining which direction iron-rich minerals are facing in Earth's crust. (When new crust is made from volcanic activity, its iron orients toward magnetic north before it cools into rock.)

These iron-rich rocks form "stripes" on the ocean floor and help researchers keep track of Earth's many magnetic flips. Swarm's new map gives an unprecedented, worldwide view of these stripes, which are associated with plate tectonics moving underwater at mid-oceanic ridges, the researchers said.

"These magnetic stripes are evidence of pole reversals," said Dhananjay Ravat, a professor of geophysics at the University of Kentucky, who was part of the project. "Analyzing the magnetic imprints of the ocean floor allows [for] the reconstruction of past core field changes," and that analysis also helps "to investigate tectonic plate motions."