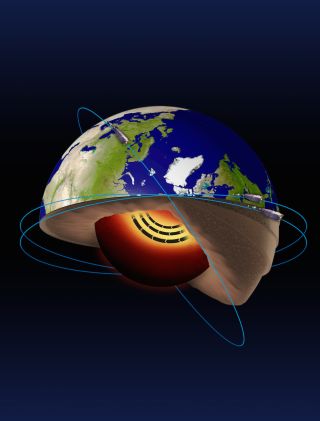 A band of molten iron is churning slowly deep inside Earth, much in the same way as a jet stream, a new study finds.

Scientists discovered the so-called molten jet stream while analyzing data from a trio of European satellites, called Swarm. The satellites launched in 2013 with the goal of studying Earth's magnetic field. In this case, Swarm's observations helped create a view akin to an X-ray of the planet, the researchers said.

"The European Space Agency's Swarm satellites are providing our sharpest X-ray image yet of the core," the study's lead researcher, Phil Livermore, an associate professor in the School of Earth and Environment at the University of Leeds in England, said in a statement. "We've not only seen this jet stream clearly for the first time, but we understand why it's there." [Photos: Hidden Ocean Locked Up Deep in Earth's Mantle]

Earth's core is buried under about 1,900 miles (3,000 kilometers) of rock, so scientists study it indirectly by measuring the planet's magnetic field. For instance, changes in the magnetic field suggested that liquid iron in the outer core moves faster in the Northern Hemisphere, largely beneath Alaska and Siberia, the researchers said.

New Swarm data has helped clarify Earth's inner workings. For example, the changes in the magnetic field are actually being caused by the molten jet stream, which moves about 25 miles (40 km) per year, currently in a westward direction, the researchers found.

Swarm's data also allowed the researchers to pinpoint the jet stream's location: It flows along a boundary between two different regions in the core, the researchers found. This movement is likely caused when liquid in the core flows toward the boundary from both sides, and then is squeezed out sideways, they said. [Photo Timeline: How the Earth Formed]

"Of course, you need a force to move the liquid toward the boundary," said study co-author Rainer Hollerbach, a professor of theoretical fluid dynamics at the School of Mathematics at the University of Leeds. "This could be provided by buoyancy, or perhaps more likely from changes in the magnetic field within the core."

This discovery is Swarm's first deep-Earth finding, and researchers hope that another is on the horizon. For now, the satellites are still circling the planet, measuring and untangling magnetic signals from the core, mantle, crust, oceans, ionosphere (an energetic part of the atmosphere about 50 miles, or 80 km, above the ground that has electrically charged particles) and magnetosphere (the magnetic field surrounding Earth), they said.

The study was published online today (Dec. 19) in the journal Nature Geoscience.