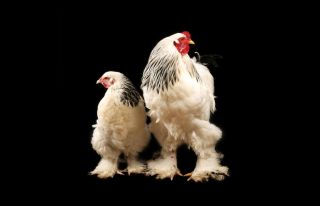 Handsome Brahma chickens are larger than many other types of chickens, and were likely the breed recently featured in a viral internet video.
(Image: © Stefan Petru Andronache/Shutterstock)

Video footage of what appeared to be an exceptionally large chicken went viral on Twitter yesterday (March 19), gathering tens of thousands of retweets and likes. It prompted exclamations of disbelief and awe, as viewers watched the massive bird navigate down the steps from its coop and strut around an outdoor enclosure.

Shared by @LifesBook_Ceo‏ at 3:23 a.m. local time, the tweet showcasing the chicken did not include any identifying information about either the chicken or its location, but several commenters on Twitter suggested that the bird was likely a Brahma chicken, a large type of domestic fowl known for its size and spectacular plumage — particularly the feathers in the broad fan of its tail and those adorning its legs and toes.

Though it's unclear from the video exactly how big the chicken is, it does appear to have much longer legs and a stockier body than the average barnyard hen, and the splay of feathers around the chicken's feet make them seem almost like massive paws as it paces the pen. [Camera Trapped: Wonderful and Weird Wildlife Around the World]

The Brahma chicken is not a separate species, but rather a breed of the domestic chicken (Gallus gallus domesticus). It is one of the largest such breeds, with males documented as weighing up to 18 lbs. (8 kilograms), though the average Brahma chicken is closer to 12 lbs. (5 kg) according to The Livestock Conservancy, a nonprofit organization that aims to protect endangered breeds of livestock and poultry.

Brahma chickens were developed in the U.S., bred primarily from large chickens that originated in China, and they were described as an official breed in the American Poultry Association's American Standard of Perfection in 1874, The Livestock Conservancy reported.

Am I the only person wondering why this chicken is so damn big pic.twitter.com/ZIWmEL2h2w

There are three color varieties — light, dark and buff — and the bird in the video appears to be a light Brahma: mostly white, with dark feathers at the tips of its wings and tail and the lower part of its neck. Brahma chickens are frequently referred to as "The King of All Poultry," and they are famed for their hardiness in cold climates, their production of large eggs and their ample quantities of meat — "a large Brahma could feed a moderate-sized family," according to The Livestock Conservancy.