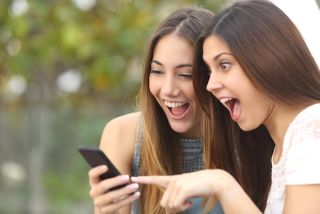 When news articles get published, they may start a life of their own. Some get buried under the deluge of online content, while a lucky few go viral. The judges in this popularity contest are readers, who decide whether or not to share an article. But how do they decide?

It turns out, people share articles that make them look good and help them improve their social bonds, according to a new study published today in the journal Proceedings of the National Academy of Sciences.

In the study, researchers at the University of Pennsylvania looked at the brain activity of 80 college students while they read the titles and abstracts of 80 New York Times articles, published in the health section. These articles had been shared a combined total of 120,000 times — via Facebook, Twitter and email — by real readers, according to the data gathered by the Times. [10 Things You Didn't Know About the Brain]

The researchers found a specific brain activity pattern that was linked to how often the articles were shared in the real world.

"We looked at parts of their brain that helped determine how valuable, self-relevant and socially relevant a piece of information is," said Emily Falk, the study’s senior author and the director of Penn's Communication Neuroscience Lab.

The findings suggest that people are interested in reading or sharing content that connects to their own experiences, Falk said. "They share things that might improve their relationships, make them look smart or empathic or cast them in a positive light."

The findings could help researchers get a better understanding of the psychology of sharing. Understanding how ideas spread can be used to increase the shareability of information that promotes well-being and decreases the sharing value of false information, Falk said.

"My lab mostly focuses on health behavior change," Falk said. "It's fine if you can have a health message that gets one person to change their behavior, but it's even better if you get them to go and tell their friends."

What your brain activity can reveal

Previous studies have looked into the psychology of sharing by asking people about their reasons for sharing an article. But such surveys suffer from several limitations. For example, people may not be aware of all their own mental processes in real time. Or, they might shy away from admitting that they shared an article because they thought it made them look smart.

"That's where the neuroscience comes in," said the study's first author Christin Scholz, a communication researcher at the university. "It helps us to measure the thought processes in real time as they are happening, without having to ask people to introspect and report what they have been thinking. While we can't read people's mind, brain imaging can give us some insights that are complimentary to other measures, like surveys."

The team focused on three brain regions: The first is a part of the brain that helps us determine the overall value of a piece of information. The second part determines whether something is relevant to our own lives. The third is the brain area people use to understand other people's thoughts and feeling. [5 Interesting Facts about Human Cooperation]

They found that activity in two of those areas — the self-relevant region and the social region — combine into a signal that is then used by the brain to determine the value of sharing a piece of information.

Compared with traditional surveys, this combined value signal better explained how much articles get shared, the researchers said.

People are different and hold different values, but they likely also share some common thought processes, Scholz said. For example, one person may think that an article might help her friend, while another may want to discuss the article with his or her friends. What both of these thoughts have in common is the social element.

"I don't think every single person interprets an article the same way, but I think the advantage of using neural data here is that it helps identify the greatest common denominator behind sharing," Scholz said.

Brain imaging is expensive, and it’s unlikely that it would be used to assess the shareability of each single article. Rather, it’s a tool that can reveal hidden brain mechanisms and inform those who aim to craft messages that reach more people, she said.

"In terms of health messages, for example, instead of giving specific instructions, perhaps we should make content that allows people to help others or encourages them to have a good conversation with somebody," Scholz says.