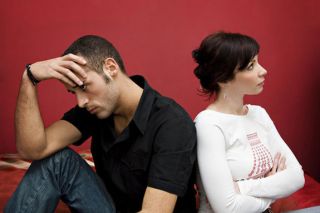 If you think relationships don't take hard work or that passion shouldn't fade if you're really in love, think again.
(Image: © Dreamstime)

There are hundreds of myths about relationships, according to Terri Orbuch, Ph.D, a Michigan clinical psychologist and author of "5 Simple Steps to Take Your Marriage from Good to Great" (Delacorte Press, 2009). The problem with persistent myths is that they can erode a relationship's happiness, she said.

When you think a relationship should be a certain way, and yours isn't, frustration sets in. And "frustration is the number one thing that eats away at a relationship," Orbuch said, and "it's directly tied to these myths."

That's why it's so critical to bust the below misconceptions. So without further ado, here are eight myths about relationships that might surprise you.

1. Myth: A good relationship means that you don't have to work at it.

Fact: "The strongest most enduring relationships take lots of hard work," said Lisa Blum, Psy.D, a clinical psychologist in Pasadena and Los Angeles, who specializes in emotionally focused therapy with couples. She believes that our culture, education system and parenting styles don't prepare us for the fact that even good relationships take effort.

She likened a healthy relationship to a good garden. "It's a beautiful thing but you wouldn't expect it to thrive without a whole lot of labor and TLC."

But how do you know if you're working too hard on a relationship? One sign, according to Blum, is if you're feeling unhappy more than you're happy. In other words, are you spending more time tending to the relationship and keeping it afloat than enjoying it?

This unhappiness becomes less of a rough patch, and more like the "normal state of affairs," she said.

Another bad sign is if you're trying hard to make improvements and changes, but you don't see the same level of effort on your partner's part. "There has to be some sense of 'we're trying really hard, both making changes and that's making a difference.'"

On the flip side, if both of you are trying and you can see positive changes being made at least some of the time, then that's a good sign, Blum said.

2. Myth: If partners really love each other, they know each other's needs and feelings.

Fact: "It's a setup to expect your partner to be able to read your mind," Blum said — because when you anticipate that your partner will know your wants, that's essentially what you're doing. We develop this expectation as kids, she said. But "as adults, we're always responsible for communicating our feelings and needs."

And once you've communicated your needs and feelings, "a better measure of the quality of your relationship" is whether your partner actually listens to your words. [5 Communication Pitfalls and Pointers for Couples ]

3. Myth: If you're truly in love, passion will never fade.

Fact: Thanks to movies and romantic novels, we assume that if we genuinely love someone, "the passion, urging and loving" never go away. And if they do disappear, then "it must not be the right relationship" or "our relationship [must be] in trouble," Orbuch said. However, passion naturally diminishes in all relationships.

Daily routines are one of the culprits, Blum said. As their responsibilities grow and roles expand, couples have less and less time and energy for each other.

But this doesn't mean that the passion is gone for good. With a little planning and playfulness, you can boost passion. Blum sees many relationships where passion is alive and well. "Passionate sex is a byproduct of sustained emotional intimacy along with a continuing sense of adventure and exploration and sense of playfulness." Orbuch also has emphasized the importance of couples doing new things to perk up their relationships (see her specific advice).

And when it comes to passion-squashing routines, Blum suggested couples ask themselves: "How do we tame our lives sufficiently that we can make time for each other and have energy left for each other?"

4. Myth: Having a child will strengthen your relationship or marriage.

Fact: Studies have shown that relationship happiness actually decreases with every child, she said. This doesn't mean that you start loving each other less or that you won't bond at all over your child, Orbuch said. But the mounting challenges can complicate relationships.

Having realistic expectations helps couples prepare themselves for their new roles, she said. When you think that a child will improve your relationship, it only adds to the complications.

As Orbuch said, "'should' statements don't allow you to see what the other person is doing to strengthen and manage the relationship," and these expectations "cloud your judgment." She recommended planning ahead and talking about the changes that will occur when you have your first child or more kids.

5. Myth: Jealousy is a sign of true love and caring.

Fact: Jealousy is more about how secure and confident you are with yourself and your relationship (or the lack thereof), she said. Take the following example: If you have a jealous partner, you might try to show them how much you care so they don't get jealous. But you soon realize that any amount of caring isn't a cure for their jealous reactions.

While you can be supportive, according to Orbuch, your partner must work on their insecurity issues on their own. "No matter what you do, you can't make your partner feel more secure" or "change their self-confidence."

Trying to make your partner jealous also can backfire. While men and women are just as likely to experience jealousy, their reactions differ. Men either get very defensive or angry, believing that the relationship isn't worth it, Orbuch said. Women, on the other hand, respond by trying to improve the relationship or themselves.

Fact: In actuality, what ruins relationships is not resolving your fights, Blum said. "Fights can be really healthy, and an important form of communication and clearing the air."

Also, the type of fight a couple has plays a role. Not surprisingly, nasty, scornful or condescending fights that leave couples resolution-less and not talking for days damage the relationship. Productive conflicts that help the relationship end with "some mutual decision about how to manage this disagreement," Blum said. (Here's help on improving your communication and becoming a better listen and speaker.)

7. Myth: In order for the relationship to be successful, the other partner must change.

Fact: Many times we're very good at the blame game and not so good at pondering how we can become better partners. Instead, we demand that our partners make such and such changes.

Unless, there are extreme circumstances like abuse or chronic infidelity, Blum said, it takes two to make changes.

But even more than that, it's up to you to figure out what you can do. While this seems "simple and obvious," 100 percent of the couples Blum sees point the finger.

"It's a profound mental shift to look at what can I do [and] what changes can I make."

8. Myth: Couples therapy means your relationship is really in trouble.

Instead, Blum suggested that people view couples therapy as preventative. This way, a couple comes in when they've been stuck on one or two conflicts for a few months, "not five or six over the last 10 years."