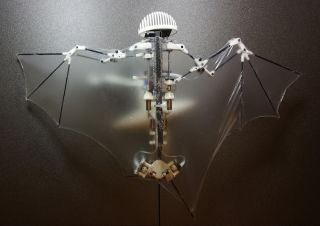 Whether they're swooping around to catch dinner or delicately hanging upside down to sleep, bats are known for their acrobatic prowess. Now, scientists have created a robot inspired by these flying creatures. Dubbed the "Bat Bot," it can fly, turn and swoop like its real-life counterpart in the animal kingdom.

Since at least the time of Leonardo da Vinci, scientists have sought to mimic the acrobatic way in which bats maneuver the sky. Someday, robotic bats could help deliver packages or inspect areas ranging from disaster zones to construction sites, the researchers said.

"Bat flight is the Holy Grail of aerial robotics," said study co-author Soon-Jo Chung, a robotics engineer at the California Institute of Technology and a research scientist at NASA's Jet Propulsion Laboratory, both in Pasadena. [The 6 Strangest Robots Ever Created]

Bats may possess the most sophisticated wings in the animal kingdom, with more than 40 joints in their wings that enable unparalleled agility during flight, likely so that they can pursue equally nimble insect prey, the researchers said.

"Whenever I see bats make sharp turns or perch upside down with elegant wing movements, I get mesmerized," Chung told Live Science.

Previous work has developed a variety of flying robots biologically inspired by insects and birds. However, attempts to build robots that mimic bats have been met with limited success because of the complexities of bats' wings, such as their multitude of joints, the researchers said.

Now, Chung and his colleagues have developed the "Bat Bot," or B2, a robot that can fly, turn and swoop like a bat. The aim is "to build a safe, energy-efficient, soft-winged robot," Chung told Live Science.

The researchers said previous bat robots followed the skeletal anatomy of these flying creatures too closely, resulting in bots that were too bulky to fly. Instead, the scientists figured out which components were key to the beating of a bat's wing — the shoulder, elbow and wrist joints, and the side-to-side swish of their thighs — and used only those in their robot.

Whereas conventional flapping-wing robots used rigid wings, the Bat Bot has thin, elastic wings. "When a bat flaps its wings, it's like a rubber sheet — it fills up with air and deforms," said study co-author Seth Hutchinson, a robotics engineer at the University of Illinois at Urbana-Champaign. During the downward stroke, "the flexible wing fills up with air, and at the bottom of the downstroke, it flexes back into place and expels the air, which generates extra lift," he explained. "That gives us extra flight time."

The Bat Bot's wings are made of bones of carbon fiber and ball-and-socket joints composed of 3D-printed plastic, all covered with a soft, durable, ultrathin, silicone-based skin only 56 microns thick. (For comparison, the average human hair is about 100 microns thick.)

The robot flapped its wings up to 10 times per second using micro-motors in its backbone. The Bat Bot weighed only about 3.3 ounces (93 grams) and had a wingspan of about 18.5 inches (47 centimeters) — measurements similar to those of Egyptian fruit bats, Chung said.

In experiments, the Bat Bot could fly at speeds averaging 18.37 feet per second (5.6 meters per second). It could also carry out sharp turns and straight dives, reaching speeds of 45.9 feet per second (14 m/s) while swooping down.

The researchers said their robot's softness and light weight make it safer for use around humans than, for example, the quadrotor drones that are popular commercially. For instance, the Bat Bot would cause little or no damage if it were to crash into humans or other obstacles in its environment, they said. In contrast, quadrotors spin their rotor blades at high speeds of up to 18,000 revolutions per minute, which could result in dangerous interactions, Chung said.

"The high-speed rotor blades of quadrotors and other craft are inherently unsafe for humans," Chung said. "Our Bat Bot is considerably more safe."

The safer, more agile nature of the Bat Bot could enable a wide range of applications. For instance, Bat Bots could serve as "aerial service robots at home or in hospitals to help the elderly or disabled by quickly fetching small objects, relaying audio and video from various distant locations without requiring hard-mounting of multiple cameras, and becoming fun, pet-like companions," Hutchinson told Live Science.

Another potential application for Bat Bots would be "to supervise construction sites," Hutchinson said. "The need for automation in construction through advances in computer science and robotics has been highlighted by the National Academy of Engineering as one of the grand challenges of engineering in the 21st century," he noted.

The dynamic and complex nature of construction sites has prevented the deployment of fully, or even partially, robotic and automated solutions to monitor them. "Keeping track of whether a building is put together in the right way and at the right time is an important problem, and it's not a trivial problem — a lot of money gets spent on that in the construction industry," Hutchinson said. Instead, Bat Bots could "fly around, pay attention and compare the building information model to the actual building that's being constructed," he added.

Bat Bots could also help inspect disaster zones and other areas. "For example, an aerial robot equipped with a radiation detector, 3D camera system, and temperature and humidity sensors could inspect something like the Fukushima nuclear reactors [in Japan], where the radiation level is too high for humans, or fly into tight crawl spaces, such as mines or collapsed buildings," Hutchinson said. "Such highly maneuverable aerial robots, with longer flight endurance and range than quadrotors have, will make revolutionary advances in monitoring and recovery of critical infrastructure such as nuclear reactors, power grids, bridges and borders."

Moreover, the Bat Bot could shed light on some of the mysteries of bat flight. Currently, researchers analyze how bats fly with video, but with the Bat Bot, researchers could develop better models of the aerodynamic forces that bats experience "beyond what can be observed with just the eyes," Hutchinson said.

The researchers noted that the Bat Bot cannot carry heavy objects yet, but future versions of the robotic bat could lead to "drone-enabled package delivery," Chung said.

Future research could achieve other aspects of bat flight, such as hovering or perching right side up or even upside down, the researchers said. Perching is more energy-efficient than hovering, "since stationary hovering is difficult for quadrotors in the presence of even mild wind, which is common for construction sites," Chung said.

The scientists detailed their findings online today (Feb. 1) in the journal Science Robotics.