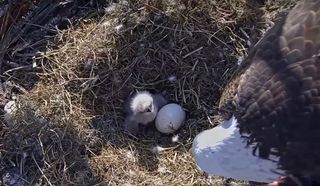 A pair of bald eagles rang in the new year with the birth of an eaglet, and the whole happy affair was captured on a live stream on the eve of 2017.

After about a month of waiting, bald eagle Harriet and her mate, dubbed M15, met their new hatchling on Dec. 31. People around the world watched the eaglet, known as E9, hatch via the Southwest Florida Eagle Cam. The baby eagle officially emerged into the world at 7:33 a.m. EST. According to the Eagle Cam's blog, E9 beganthe hatching process two days earlier.

The live stream, which remains online, offers a 24/7 view of the nest. Since the eaglet's hatching, the feed has captured E9 taking its first bites of food and gaining strength. [Photos: Bald Eagles of the Mighty Mississippi]

"E9 arrived with a voice and an appetite, peeping away for food," Southwest Florida Eagle Cam officials wrote on the organization's blog.

Another egg in the nest has not hatched yet, and according to the Eagle Cam's Facebook page, it likely won't. On average, the window for bald eagles to hatch is between 34 and 40 days, according to the Facebook update. These eggs were laid on Nov. 22 and Nov. 25, so both eggs are now past the hatching window.

However, the live stream will continue to follow E9's development. According to Eagle Cam representatives, the eaglet will be at half its adult body weight by day 30, gaining about 1 lb. (0.45 kilograms) every five days.

This eagle live feed is broadcast fromthe property of Dick Pritchett Real Estate in North Fort Myers, Florida. Similar wildlife cams can be found at zoos and nature preserves around the globe, as well as in the wild. Similar broadcasts have captured everything from a somersaulting panda to the lives of jellyfish.