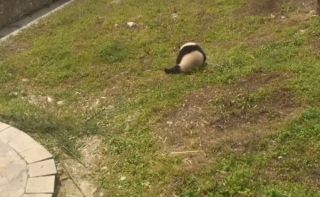 A young panda was caught on camera having a ball, rolling around in the grass at the Gengda Wolong Panda Center in China.

The baby panda, named Hua Rong, can be seen somersaulting and rolling around its habitat at the Panda Center, located in the heart of the Wolong Nature Reserve — home to wild giant pandas. Hua Rong's playtime was captured on the Panda Center's live panda cam, part of EXPLORE.org's international network of live nature cameras.

Giant pandas are listed as endangered by the International Union for Conservation of Nature (IUCN). Only 1,600 pandas are estimated to be living in the wild, and another 300 live in zoos and breeding centers around the world. [In Photos: The Life of a Giant Panda]

Camera feeds offer people an opportunity to see exotic animals as they live. Such cameras have captured a newborn panda's squawks for its mother and an adorable cub playing in snow for the first time.

Similar live camera feeds can be found at zoos, nature preserves and in the wild around the globe, with broadcasts showing everything from the hatching of condor chicks to the lives of jellyfish.