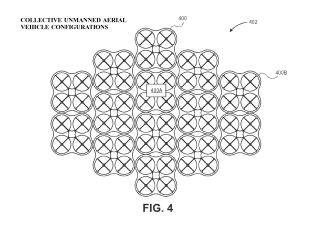 Cobble a group of drones together and you get a "collective drone," capable of lifting heavier burdens.
(Image: © USPTO.gov)

What happens when you connect a flock of flying drones? You get a "collective unmanned aerial vehicle" that's capable of lifting heavier burdens and flying greater distances than smaller drones can, according to a patent recently granted to online retailer Amazon.

The Amazon Technologies Inc. patent describes a large and robust flying drone made up of numerous smaller drones, designed to make long-distance flights or to carry heavy packages.

According to the patent, filed Feb. 19, 2015, and granted Dec. 29, 2016, individual modules could detach from the collective drone body once they were no longer required, and operate independently to deliver smaller burdens. [5 Surprising Ways Drones Could Be Used in the Future]

Collectively, a group of drones might outperform a single drone by sharing resources, such as power and navigation capabilities, in order to operate more efficiently. In addition, the size of a linked drone array would be more visible, thereby allowing aircraft and air traffic controllers to spot them more easily, Patent Yogi reported.

The patent description explains that a collective aerial drone would be capable of transporting "virtually any size, weight, or quantity of items," and would also be able to travel longer distances.

By comparison, the average quadcopter drone — a design that incorporates four propellers — can typically fly continuously for up to 30 minutes and transport up to 10 pounds (4.5 kilograms), according to Patent Yogi.

And this isn't the only patent that Amazon acquired in 2016.

Can you imagine a flying warehouse? Amazon can. The company received a patent on April 5, 2016, for "an airborne fulfillment center ("AFC") and the use of unmanned aerial vehicles ("UAV") to deliver items from the AFC to users." The vehicle could be a high-altitude airship cruising at 45,000 feet (13,716 kilometers), dispatching flying drones to make their deliveries far below, according to the patent description.

Another patent, received Dec. 20, 2016, addresses countermeasures to protect airborne drones against threats from hackers and from "malicious persons" armed with bows and arrows.

Amazon is even investigating the possibility of subterranean deliveries, with a patent granted Nov. 29, 2016, for "dedicated network delivery systems" conveying packages underground. According to the description, items "may be driven by or along one or more conveyors or rails, and may comprise one or more pressure-controlled carriers within a vacuum environment or among any type of fluid, including liquids or gases."

In recent years, drones have certainly become more visible, capturing photos and video selfies and competing in races. Some are even helping scientists monitor Arctic ice or transport medical samples from remote villages in Madagascar.

Flying drones bearing packages may not be landing on our doorsteps just yet, but Amazon's patents suggest that the company has big plans for the future of airborne robotic deliveries.

At this point, however, it remains to be seen whether Amazon will be able to get this technology off the ground — or under it.