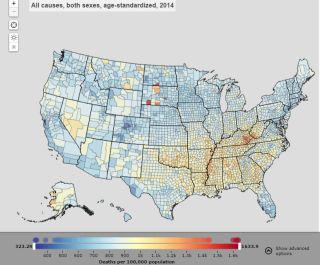 A map showing death rates from all causes in the United States in 2014.
(Image: © Institute for Health Metrics and Evaluation)

The rates at which people in the U.S die from different factors vary significantly among the regions of the country, according to a new study. For example, the rates of death from cardiovascular diseases were highest in the Southeast over the past three decades, according to the study. But death rates from self-harm and interpersonal violence were highest in the Southwest, the researchers found.

In more than 2,000 counties, the rates of deaths related to substance abuse and mental disorders have more than tripled since 1980, the researchers said. Some clusters of counties in Kentucky, West Virginia and Ohio saw tenfold increases in the rates of these deaths over the study period, they said. [The Odds of Dying from Shark Attacks, Tsunamis & Dozens of Other Causes]

The reasons why higher death rates vary across geographic areas are not completely clear, but the authors suggested some ideas. For example, the higher death rates from cardiovascular diseases might have something to do with higher rates of obesity in these areas, said study co-author Christopher J. L. Murray, a professor of Global Health at the University of Washington. (Previous research has shown a link between obesity and a greater risk of cardiovascular disease.)

The higher rates of death from self-harm and interpersonal violence in the Southwest may be related to the isolation that many people face there. People in the Southwest tend to live in isolated, rural areas and have less social interaction — a factor that previous research has linked to a greater risk of violence. They also have easy access to guns, Murray told Live Science. In the study, the researchers looked at death rates in about 3,110 U.S. counties between 1980 and 2014. During this time about 80.4 million people in the U.S. died, the researchers found.

The researchers found that cardiovascular diseases caused 39.8 percent of deaths in the U.S. between 1980 and 2014. These diseases were also the leading cause of death in the U.S in 2014, according to the study, published today (Dec. 13) in the journal JAMA. [10 Amazing Facts About Your Heart]

The reasons behind these disparities in cancer death rates are not clear and are likely very complex, the researchers said. But smoking may play a role, Murray said.