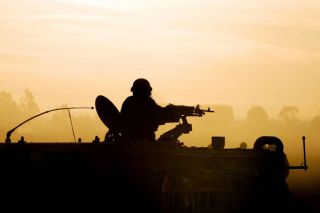 Why do humans kill each other? It's a question that has been posed for millennia. At least part of the answer may lie in the fact that humans have evolved from a particularly violent branch of the animal family tree, according to a new study.

From the seemingly lovable lemur to the crafty chimpanzee and mighty gorilla, the mammalian order of primates — to which humans belong — kill within their own species nearly six times more often than the average mammal does, Spanish researchers found.

Whales rarely kill each other; the same goes for bats and rabbits. Some species of felines and canines occasionally kill others within their own species — for example, when sparring over territory or mates. Yet most primates use lethal violence with greater frequency than these other animal groups, sometimes even killing their fellow species members in organized raids. [Top 10 Things that Make Humans Special]

Humans exhibit a level of lethal aggression that fits this pattern in primates, the researchers determined, according to the findings, published today (Sept. 28) in the journal Nature. Humans are equally as violent to each other as most other primates are, and we have been this way pretty much since the dawn of humankind.

But that doesn't mean we can't change our ways, the research also suggests.

In an exhaustive study, researchers led by José María Gómez of Spain's Higher Council for Scientific Research (CSIC) analyzed data from more than 4 million deaths among the members of 1,024 mammal species from 137 taxonomic families, including about 600 human populations, ranging from about 50,000 years ago to the present. The researchers quantified the level of lethal violence in these species.

The researchers calculated that about 2 percent of all human deaths have been caused by interpersonal violence — a figure that matches the observed values for prehistoric humans such as Neanderthals, and most other primates. [8 Humanlike Behaviors of Primates]

"[This is a level of] violence we should have only considering our specific position in the mammalian phylogenetic [evolutionary] tree," Gómez told Live Science. "Within primates, humans are not unusually violent."

Yet unlike violence among other mammals, the levels of lethal interpersonal human violence have fluctuated throughout history — from low levels during nomadic periods, to higher levels when plunder and conquest became profitable, to lower levels in the era of civilized societies.

This implies, perhaps optimistically, that human culture can influence our evolutionarily inherited level of lethal violence, the researchers said. In other words, we can control our propensity for violence — however deep-rooted it may be — better than other primates can.

"This is a nifty study with important results that debunk the old 'killer ape' view of humanity," said Douglas Fry, professor and chair of anthropology at the University of Alabama at Birmingham. Fry pointed to earlier ideas, put forth by researchers including Harvard University evolutionary psychologist and author Steven Pinker, that human violence was much more common in human ancestors that lived in earlier epochs than it is now.

"Employing an innovative approach that contextualizes human lethal aggression within a mammalian framework, Gomez and colleagues demonstrate that recent assertions by Steven Pinker and others that violent death in the Paleolithic was shockingly high are greatly exaggerated," said Fry, an expert on human evolution who was not involved with the new study.

Other experts, however, have noted the limitations of the data. For instance, there can be an inherent underestimation of violent death in prehistoric humans given the lack of forensic evidence, as well as a difficulty in comparing such disparate data on living and dead mammalian populations, according to Richard Wrangham, a professor of biological anthropology at Harvard University who has researched the origins of human warfare but was not involved in the new study.

Wrangham said he suspects that humans are more violent to each other than the study suggests.

"Certainly, there is culturally derived variation across societies in the rate of killing adults; but as a species, we belong to a club…that kill[s] adults at an exceptionally high rate," Wrangham told Live Science. "It should not be taken to mean that humans are 'ordinary' with respect to levels of lethal violence. … Humans really are exceptional."

Ironically, human violence may be a result of being social, Gómez said, as groups aim to protect themselves or otherwise secure resources and maintain order.

"Territorial and social species showed significantly higher values of lethal violence than solitary and nonterritorial mammals," Gómez said. "This is something that should be explored in the future."