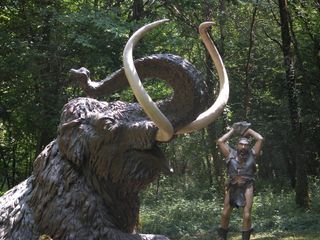 The Paleo Diet is an attempt at recreating the diet of humans living in the Paleolithic era.
(Image: © Jan van der Hoeven / Shutterstock.com)

The Paleo Diet — also known as the Stone Age, Caveman or Ancient Diet — is a modern attempt to replicate the diet of humans of the Paleolithic age. These ancient hunter-gatherers lived before the advent of agriculture and subsisted on lean proteins (like fish, venison and poultry), eggs, fruits, vegetables, nuts and roots.

Though the Paleo Diet seems new, it has actually been around for several decades. It was started around the 1970s by gastroenterologist Walter Voegtlin with the idea that Paleolithic ancestors, who lived in a range of time from 2.5 million to 10,000 years ago, could teach modern men how to eat healthy.

The diet was popularized by Dr. S. Boyd Eaton, a professor of anthropology at Emory University who believed that such a diet is what the human body — both then and now — was built to eat.

In his 1988 book "The Paleolithic Prescription," Eaton and his co-authors argued that humans are ill-suited to modern diets because the large part of a human's genetic makeup was established thousands of years ago in pre-agricultural societies. Eaton and other advocates of the Paleo diet believe that many modern diseases are a result of today's eating habits.

What the caveman ate

The theory behind that Paleo Diet is that technology, mainly agriculture, developed too quickly for the human body to naturally adapt, according to the Mayo Clinic. This diet allows the body to consume only foods it is evolved enough to digest.

The Paleo Diet focuses on the mantra that if a caveman didn’t eat it, modern man shouldn’t either. This encompasses processed foods; any foods that have been harvested by the use of ranching or agriculture, such as grains or cane sugar; legumes, such as lentils, beans, peanuts and peas; potatoes; and dairy products, because early man didn’t raise cattle. All fruits and vegetables must be organic, and salt must be limited, because early man didn’t salt his food.

While this sounds good in theory, scientists have a problem with its accuracy. “Anthropologists familiar with our Paleolithic ancestors’ behavior agree that these early humans did not follow any one style of eating. Basically, they ate whatever and whenever they could," said Neal Malik, an assistant professor at the School of Natural Health Arts and Sciences of Bastyr University. "They didn’t purposely follow a ‘clean’ diet — they just ate whatever was available to ensure survival. In fact, some scientists have gone so far as to say that early humans had a diet similar to pigs."

Malik also pointed out that early humans were located all around the globe during this era and they didn’t all eat the same foods. Some did actually eat beans, grains and other foods that are off-limits in this modern version of the diet.

Benefits of the Paleo Diet

The benefits of the Paleo diet stem from cutting out “bad” foods. “This diet cuts out sugar and processed foods. It includes lots of fruits and vegetables, as well as healthy fats,” said registered dietitian Lori Chong. This can help to lower blood pressure and help better regulate blood sugar.

For example, the University of Lund found that a Paleolithic diet improves glucose tolerance more than a Mediterranean-like diet in 29 individuals with ischemic heart disease. The University of Lund also found, in a separate study, that the Paleolithic diet improved glycemic control and several cardiovascular risk factors compared to a Diabetes diet in 13 patients with type 2 diabetes in a three-month trial. Another study, by the Karolinska Institute in Huddinge, Sweden, found that eating short-term Paleolithic or hunter-gatherer diets to prevent cardiovascular diseases showed some favorable effects, but they noted that further studies were warranted.

Risks of the Paleo Diet

Like many diets, the risks that come from eating the Paleo Diet is due to an imbalanced diet. For example, the Paleo Diet requires eating a large amount of meat. This can lead to excess consumption of saturated fat and cholesterol. “Those that follow this pattern of eating do not account for the differences in fatty acid composition of the meat of the animals today versus the composition 10,000 years ago." Malik told Live Science. "During our ancestors’ days, the fatty acid composition of livestock consisted of higher omega-3 fats— fats that actually improve our health. However, due to differences in the way we feed and raise livestock today, the meat tends to be higher in saturated fat.”

People who eat Paleo are also missing out on fiber, vitamins and minerals that come from a diet that includes healthy grains and dairy products. Some nutrients that someone on a Paleo diet may be lacking are iron, zinc calcium, folate, thiamine, riboflavin, niacin, vitamin B12 and phosphorus. The UK Association of Dieticians ranked the Paleo Diet as one of the five worst celebrity diets to avoid in 2015 because cutting foods, without a good substitution, can compromise good health.