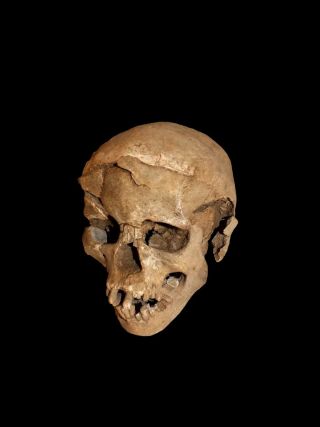 Researchers in Kenya recently unearthed evidence of what may have been a violent skirmish or battle. Of 27 people unearthed, 10 showed signs of violent injury, such as clubbing wounds or wounds from an arrow. The site, which is about 10,000 years old, may harbor the oldest known evidence for warfare. Here, the skull of a man who was clubbed in several spots on his head before death.
(Image: © Marta Mirazohn Lahr)

Skeletons unearthed in Kenya may be the oldest known evidence of human warfare, according to a new study.

The skeletons of 27 people who died about 10,000 years ago bear marks of blunt force trauma and projectile wounds, the researchers said in the study. The victims included men, women and children.

"That scale of death — it can't be an individual murder or homicide amongst families," said study co-author Robert Foley, an anthropologist and archaeologist at the University of Cambridge in England. "It was a result of some intergroup conflict." [See Images of the Grisly War Victims]

The findings could help answer questions about the roots of war and human aggression, Foley said.

Warlike by nature or nurture?

Are humans noble savages, or is the life of mankind nasty, brutish and short? For millennia, philosophers such as Jean-Jacques Rousseau and Thomas Hobbes have debated when and how war emerged in the human experience. Some anthropologists have argued that organized warfare didn't emerge until complex societies with political hierarchies rose to power. Others claimed war emerged after the agricultural revolution, when people had finally amassed enough resources, such as livestock, worth fighting over. By that reckoning, true warfare — rather than squabbles between friends or family gone horribly wrong — would have been completely foreign to ancient hunter-gatherer groups.

But others note that humans' closest living relatives, chimpanzees, organize violent attacks on lone chimps that stray into their territory. And modern-day hunter-gatherer communities, such as the Yanomami Amerindians in the remote Amazon jungle, regularly engage in violent and warlike skirmishes against neighboring villages.

Still, all of the evidence for warlike behavior in ancient people was indirect. More specifically, it was based on analogies with nonhumans, or on comparisons of modern hunter-gatherers, whose societies are threatened by habitat loss and colonialism, with ancient ancestors who did not face the same pressures, Foley said.

The new bones, which were uncovered at a site called Naturak, on the southwest edges of Lake Turkana in 2012, provide the first direct evidence of warfare in ancient hunter-gatherers. The discovery came as part of the larger In Africa project, led by Marta Mirazón Lahr, a researcher of human evolutionary biology at the University of Cambridge. The project aims to study the origin of Homo sapiens in East Africa.

Over the millennia, sediments from the lake provided the perfect conditions to preserve the bones, while falling lake levels have revealed the fossils over time, Foley said.

In this instance, the bones were once buried in a lagoon and were in the process of being revealed, with some partially visible at the surface. When the team dug deeper, they found a total of 27 skeletons, some nearly complete and some with just a few fragments, all dating to between 9,500 and 10,500 years ago, according to the paper, which was published today (Jan. 20) in the journal Nature.

"It's not a cemetery; people haven't been deliberately buried there," Foley told Live Science. "They've fallen and been left where they died."

Many of the bodies harbored blunt force trauma head wounds, as well as what look like arrow wounds to the head and neck. The murder weapons included projectiles, most likely bows and arrows, as well as wooden clubs, the researchers said. Men, women and children were killed; one woman was found with broken knees, lying on her side with her wrists in front, as if they were bound.

The number of casualties rules out the notion of an interfamily feud, Foley said. More people from the group may have been killed, and still others may have escaped, which suggests the group was larger than the average hunter-gatherer group. (Most hunter-gatherer groups tend to hover around 25 to 30 people per encampment, Foley said.) And given the simple tools used to deal death, the attacking group was probably larger still, he added.

This idea suggests that the two warring groups were likely more settled than the average hunter-gatherer population, Foley said. That's not surprising, as hunter-gatherers who tend to stay in one place for longer periods often live near lakes, where food is plentiful and unlikely to be depleted by long stays, he added.

"That fits into the idea of a slightly more densely packed population where intergroup conflict is likely to arise," Foley said. "It's quite difficult to have a war with a highly mobile group that's very dispersed."

Although archaeologists have found ancient murder victims that are hundreds of thousands of years old, there was no way to tell what spurred the violence or whether it was part of a larger armed conflict, Foley said. The new findings suggest that war or warlike conflict is a truly ancient part of the human experience, he said.

"Violence is a pretty ubiquitous part of the human behavioral repertoire," Foley said. "Having said that, so too is altruism, cooperation, caring."