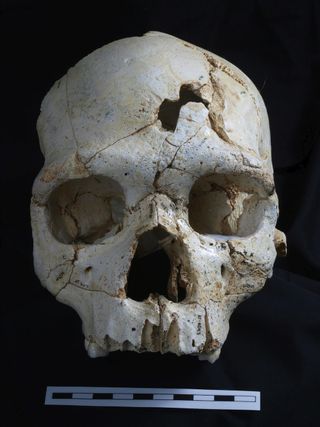 A 430,000-year-old partial skull unearthed in a bone pit in Spain may have belonged to one of the world's oldest murder victims. The skull bears two similarly-shaped wounds, likely from another human attacking the person with a spear or handax.
(Image: © Javier Trueba / Madrid Scientific Films)

Archaeologists may have unearthed one of the world's oldest cold cases — a skull fragment found in a Spanish cave from an ancient murder victim whose head was bashed in.

The skull was first unearthed in the Atapuerca Mountains, which are threaded by a series of limestone caves, sinkholes and tunnels. In 1987, researchers scrambled down a chimney into one of those caves to discover a giant bone bed.

The site, known as Sima de los Huesos, or "pit of the bones," harbors thousands of skeletal fragments from at least 28 individuals from multiple Homo species, including Homo heidelbergensis and a mysterious Homo species known only as the Sima de los Huesos hominin. Scientists don't know exactly why so many bodies were buried in this region, but many have speculated that it is one of the world's oldest burial pits. [8 Grisly Archaeological Discoveries]

"The bodies were deposited at the site by other members of the social group," study co-author Nohemi Sala, a paleontologist at the Carlos III Health Institute in Madrid, speculated.

Scientists excavating at the site first found a skull fragment in 1990, but it wasn't until years later that they found other matching pieces of the skull. After many years, Sala and her colleagues painstakingly reconstructed the skull, revealing two holes poked through it. The skull belonged to a young adult of unknown sex and human species.

To solve this ancient murder mystery, the team analyzed the chemical makeup and structure of the bone around the holes, and found the head wounds had not healed before death, suggesting the man or woman died of his injuries.

While it's possible that the "person" took a tumble down the chimney and bashed his head on a limestone boulder, it's unlikely he could have sustained two such wounds through an accidental fall, the researchers wrote in their paper, which was published today (May 27) in the journal PLOS ONE. In addition, the slow settling of the ground over hundreds of thousands of years didn't produce enough energy to cause the person's head wounds, Sala added.

That left one logical conclusion: murder.

"Based on the similarities in shape and size of both the wounds, we believe they are the result of repeated blows with the same object and inflicted by another individual, perhaps in a face-to-face encounter," Sala said. "We are not sure what the object was. However, possibilities include a wooden spear or a stone hand ax."

While ancient hominins may have cannibalized and butchered each other, there has been relatively little evidence for people using deadly force against other humans during the Paleolithic. At Shanidar Cave in Iraq, scientists have found a Neanderthal with a wound around his ribs, but that wound healed and was probably not lethal, the researchers wrote. In Sungir Cave in Russia, a skeleton bears a deadly spine fracture clearly caused by violence, but that could have been the result of a hunting accident, the researchers wrote.