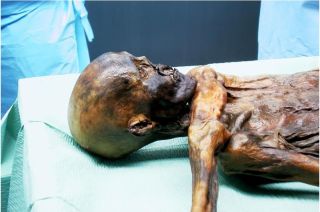 The mummified body of Ötzi.

Ötzi the Iceman, Europe's oldest mummy, likely suffered a head injury before he died roughly 5,300 years ago, according to a new protein analysis of his brain tissue.

Ever since a pair of hikers stumbled upon his astonishingly well-preserved frozen body in the Alps in 1991, Ötzi has become one of the most-studied ancient human specimens. His face, last meal, clothing and genome have been reconstructed — all contributing to a picture of Ötzi as a 45-year-old, hide-wearing, tattooed agriculturalist who was a native of Central Europe and suffered from heart disease, joint pain, tooth decay and probably Lyme disease before he died.

None of those conditions, however, directly led to his demise. A wound reveals Ötzi was hit in the shoulder with a deadly artery-piercing arrow, and an undigested meal in the Iceman's stomach suggests he was ambushed, researchers say. [Mummy Melodrama: Top 9 Secrets About Otzi the Iceman]

A few years ago, a CAT scan showed dark spots at the back of the mummy's cerebrum, indicating Ötzi also suffered a blow to the head that knocked his brain against the back of his skull during the fatal attack.

In the new study, scientists who looked at pinhead-sized samples of brain tissue from the corpse found traces of clotted blood cells, suggesting Ötzi indeed suffered bruising in his brain shortly before his death.

But there's still a piece of the Neolithic murder mystery that remains unsolved: It's unclear whether Ötzi's brain injury was caused by being bashed over the head or by falling after being struck with the arrow, the researchers say.

The study was focused on proteins found in two brain samples from Ötzi, recovered with the help of a computer-controlled endoscope. Of the 502 different proteins identified, 10 were related to blood and coagulation, the researchers said. They also found evidence of an accumulation of proteins related to stress response and wound healing.

A separate 2012 study detailed in the Journal of the Royal Society Interface looked at the mummy's red blood cells (the oldest ever identified) from a tissue sample taken from Ötzi's wound. That research showed traces of a clotting protein called fibrin, which appears in human blood immediately after a person sustains a wound but disappears quickly. The fact that it was still in Ötzi's blood when he died suggests he didn't survive long after the injury.

Proteins are less susceptible to environmental contamination than DNA, and, in the case of mummies, they can reveal what kinds of cells the body was producing at the time of death. A protein analysis of a 15-year-old Incan girl, who was sacrificed 500 years ago, recently revealed that she had a bacterial lung infection at the time of her death.

"Proteins are the decisive players in tissues and cells, and they conduct most of the processes which take place in cells," Andreas Tholey, a scientist at Germany's Kiel University and a researcher on the new Ötzi study, said in a statement.

"Identification of the proteins is therefore key to understanding the functional potential of a particular tissue," Tholey added. "DNA is always constant, regardless of from where it originates in the body, whereas proteins provide precise information about what is happening in specific regions within the body."

In addition to the proteins related to clotting, Tholey and colleagues also identified dozens of proteins known to be abundant in brain tissue in the samples from Ötzi. A microscopic analysis even revealed well-preserved neural cell structures, the researchers said.

"Investigating mummified tissue can be very frustrating," study author and microbiologist Frank Maixner, of the European Academy of Bolzano/Bozen (EURAC), said in a statement. "The samples are often damaged or contaminated and do not necessarily yield results, even after several attempts and using a variety of investigative methods. When you think that we have succeeded in identifying actual tissue changes in a human who lived over 5,000 years ago, you can begin to understand how pleased we are as scientists that we persisted with our research after many unsuccessful attempts."

Their research was detailed in the journal Cellular and Molecular Life Sciences.