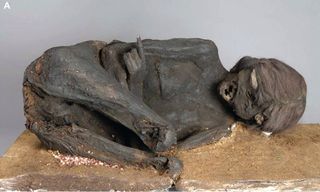 An Incan mummy that was sitting in German collections for more than a century.
(Image: © Panzer et. al, PLOS ONE 2014)

A mysterious mummy that languished in German collections for more than a century is that of an Incan woman killed by blunt-force trauma to the head, new research reveals.

A new analysis shows that the mummy was once an Incan woman who also suffered from a parasitic disease that thickens the heart and intestinal walls, raising the possibility that she was killed in a ritual murder because she was already on the brink of death.

The story began in the 1890s, when Princess Therese of Bavaria acquired two mummies during a trip to South America. One was soon lost, but the other somehow made its way to the Bavarian State Archaeological Collection in Munich. [See Images of the Murdered Incan Mummy]

Bombings and geographic moves destroyed any documentation of the mummy, so little was known about its origin, said study co-author Andreas Nerlich, a paleopathologist at Munich University.

To learn more about the enigmatic remains, Nerlich and his colleagues put the mummy through a computed tomography (CT) scanner.

From the outside, the mummy's head looked fairly normal, but the frontal bones of the skull were completely destroyed.

"She must have received a couple of really severe hits by a sharp object to her skull just before her death," which killed her, Nerlich told Live Science. "The skull bones that had been destroyed fell into her brain cavity, and they are still there today," he added.

After the woman died, she was buried shallowly, likely in the bone-dry Atacama Desert, where the parched sand and air quickly sucked all the fluids out of her body, halting decomposition and naturally mummifying her, Nerlich said. [In Photos: The 10 Driest Places on Earth]

Several lines of evidence point to the woman's Incan origin.

She had the characteristic skull deformation associated with Incan head flattening and skull bone structures found in South American populations but not European ones. Scientific testing revealed that the woman lived sometime between A.D. 1451 and 1642. The mummy was also wearing hair bands made from alpaca or llama hair — another indication of her South American origin.

Different foods contain different proportions of carbon and nitrogen isotopes (atoms of the same element with different numbers of neutrons), so the ratio of these two isotopes in the mummy's hair revealed her origins.

Based on those isotopes, the woman likely lived near the coastline in what is now Peru or Chile, and ate a diet high in seafood and maize, a New World crop, Nerlich said. She was between 20 and 25 years old when she died.

Any theories about why the woman died violently are highly speculative, Nerlich said. Combined with a DNA analysis of parasites taken from rectal tissue, the CT scan results suggest that from infancy, the woman suffered from Chagas disease, which is caused by the protozoan Trypanosoma cruzi. As a result, she probably had trouble with breathing and digestion, Nerlich said.

One possibility is that she was killed in a ritual murder, just as other Incan mummies were.

The findings on the mummy, which will be on exhibit at the Archaeological Collection of the State of Bavaria in Munich until mid-August, were published today (Feb. 26) in the journal PLOS ONE.