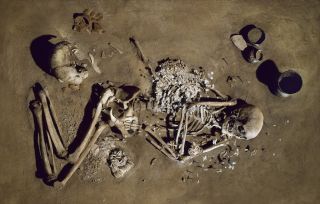 A female from the Corded Ware culture was buried with hundreds of beads. DNA from this fossil was used to reconstruct the ancient mitochondrial heritage of Europe.
(Image: © Juraj Liptak.)

Neolithic hunter-gatherers and farmers lived side by side without having sex for more than 2,000 years, new research suggests.

Analysis of fossil skeletons unearthed in a cave in Germany revealed that the two populations remained mostly separate for two millennia, despite living in the same region.

"We thought up till now that shortly after the introduction of farming in central Europe all hunter-gatherers kind of vanished," said study co-author Ruth Bollongino, an archaeogeneticist at the Johannes Gutenberg University in Germany. "This is mainly because we hardly find any artifacts. We have absolutely no ongoing proof of a hunter-gatherer lifestyle after the early Neolithic," around the time when farmers were first migrating from the Middle East.

The findings were published today (Oct. 10) in the journal Science. In a separate study in the same issue of Science, researchers found that by 3,500 years ago, all of the genetic makeup of modern Europe was mostly in place. [History's 10 Most Overlooked Mysteries]

In 2004, archaeologists first discovered the Blätterhöhle, a long, narrow cave in Hagen, Germany, filled with more than 450 skeletal fragments that belonged to at least 29 individuals. Carbon isotope dating revealed the cave had been used in the Mesolithic period, between 9210 and 8340 B.C., and in the Neolithic period, between 3986 and 2918 B.C. The cool, dry environment provided perfect preservation conditions for the delicate DNA housed within the bones. [See Images of the Excavations]

Bollongino and her colleagues analyzed the fossils' mitochondrial DNA, genetic information carried in the cytoplasm of the cell that is only passed on from the mother, finding usable information in 25 of the individuals.

Separately, the researchers also analyzed carbon and nitrogen isotopes, or variants of the same elements with different molecular weights. Because different foods contain different ratios of heavy and light isotopes, the team was able to pinpoint the diets of the ancient people.

Isotope analysis also revealed the latter group subsisted on a diet of mainly freshwater fish, while the farmers ate more domesticated animals. In addition, the analysis suggested people across the two groups rarely had sex with each other over a period spanning about 2,000 years.

The farmers and fishers shared the same burial place, so they must have had some contact, Bollongino said.

"I think it's very unlikely they did not know of each other or trade, but for some reason, they stayed amongst themselves," Bollongino told LiveScience.

In the second study, researchers analyzed the mitochondrial DNA from more than 364 fossil remains found at more than 20 sites within the Saxony-Anhalt region of Germany, which dated to between 5500 and 1550 B.C.

The team concluded that the modern maternal genetic makeup of Europe was mostly in place by about 3,500 years ago, study co-author Wolfgang Haak, a molecular archaeologist at the University of Adelaide in Australia, wrote in an email. The hunter-gatherers may have died out by that time or stuck around for a little while longer in isolation, but they did not contribute much of a genetic legacy to modern Europe.

Neolithic farmers were dominant for 2,500 years after the introduction of farming from the Middle East, though the new data can't reveal whether ancient Europeans truly vanished, or simply migrated to more isolated areas.

"In all likelihood [hunter-gatherers] must have retreated to areas that were less suitable for farming and where a [hunter-gatherer] subsistence could be sustained despite the (occasional) disturbance by farmers," Haak wrote.

Later, Scandinavian hunter-gatherers gradually assimilated into Neolithic farming culture, probably because the nomadic way of life became too difficult to sustain as farmers continued their expansion. Climate fluctuations may have also played a role, Haak said.