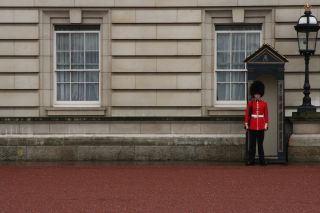 A member of the Queen's Guard outside of Buckingham Palace in London.
(Image: © skoggy, stock.xchng)

British men may trace their lineage back to hunter-gatherers, not farmers as had previously been suspected.

A new genetic lineage study finds that, contrary to previous research, British men do not descend from immigrant farmers who migrated west from the Near East around 10,000 years ago. Instead, the new study finds that a common Y-chromosome gene in today's British men traces back to hunter-gatherers who settled in Europe long before farming got popular.

In a study first published online in August 2010 in the European Journal of Human Genetics, researchers from the Sorenson Molecular Genealogy Foundation in Utah reported that a certain genetic mutation on the Y chromosome (male sex chromosome) was most common in the southeast of Europe and much less prevalent on the British Isles and other northwestern regions. This southeast-northwest pattern matched the spread of the Linearbandkeramik, or Linear Pottery, culture, a Neolithic culture known for their pottery kitchen dishes.

Another study, this one published in the journal PLoS Biologyin 2010, also argued that a group of people who carried a certain set of genes known as haplogroup R1b1b2 (R-M269) could trace their ancestry to the Neolithic expansion of farming cultures from the east. About 110 million European men are in this group.

But the new paper, published in the journal Proceedings of the Royal Society B: Biological Sciences, uses a larger dataset of more than 10,000 Europeans, Near Easterners and West Asians. In this comprehensive dataset, the researchers found, the previously reported southeast-northwest gradient didn't appear. Multiple R-M269 subgroups are common in different parts of Europe, the researchers wrote, suggesting that various hunter-gatherer groups radiated outward from different areas to populate Europe.

According to Dr Cristian Capelli, the Oxford geneticist who led the research, the study "resets" the debate on the peopling of Europe.

"Our works overturns the recent claims of European Y chromosomes being brought into the continent by farmers," Capelli said in statement.