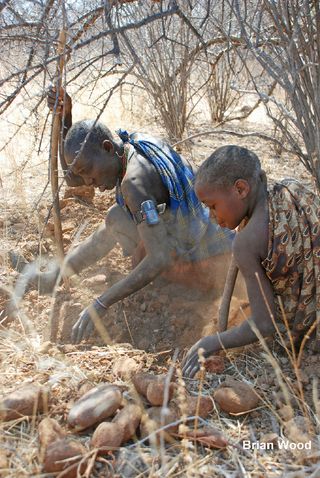 Members of the Hadza culture of Tanzania dig for tubers. One woman wears a monitor that measures her heart rate and her movement with GPS.
(Image: © Brian M. Wood, Yale University)

The world is getting fatter, and a Western lifestyle is widely portrayed as the culprit, since it is believed to be at odds with the genetic legacy of modern humans' hunter-gatherer ancestors.

So, how does this Western lifestyle really stack up against that of hunter-gatherers? To find out, researchers turned to the Hadza, modern hunter-gatherers whose habitat is the savanna of northern Tanzania.

"While no living population is a perfect model of our species' past, the Hadza lifestyle is similar in critical ways to those of our Pleistocene ancestors," writes the team, referring to the epoch that spanned from 2.6 million to 11,700 years ago and saw the first emergence of our species.

"If current models for obesity are correct, the Hadza, with their natural diet and lack of mechanization, should expend more energy than individuals living in market economies with comparatively sedentary lifestyles and highly-processed, sugar-rich diets," they write.

However, the metabolic measurements they gathered from 30 Hadza men and women, and compared with other groups around the world, indicate this isn't quite the case.

Not surprisingly, the Hadza were more physically active than Westerners. However, they didn't expend more energy. The Hadza's average daily energy expenditure was no different than that of Westerners, after controlling for body size, the analysis found.

"We hypothesize that human daily energy expenditure may be an evolved physiological trait largely independent of cultural differences," they write.

Unlike a growing portion of the Westernized world, however, the Hadza are lean. This suggests obesity rates in Westernized countries stem from differences in energy intake — meaning more rich food than our human ancestors ate, they conclude.

The results were published online July 25 in the journal PLoS ONE.

Editor's Note: This story was corrected at 11:40 a.m. ET on Aug. 10 to correct a reference to the role of a sedentary lifestyle in promoting obesity. The results of the study indicate that the caloric intake in western countries, not a sedentary lifestyle, have lead to high rates of obesity.