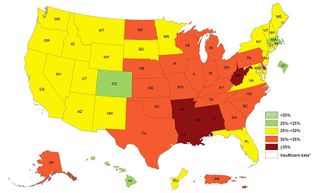 After years of soaring to new heights, obesity rates in the U.S. appear to be leveling off, according to a new report.

The report found that, from 2015 to 2016, adult obesity rates remained stable in 45 states. Rates increased in just four states — Colorado, Minnesota, Washington and West Virginia — and decreased in one state, Kansas.

This is a change from prior years, when many states saw increases in their obesity rates. For example, in 2006, obesity rates increased in 31 states, and in 2010, obesity rates increased in 16 states, according to the report, from the Trust for America’s Health, a nonprofit health advocacy organization, and the Robert Wood Johnson Foundation (RWJF), a philanthropic organization that funds health research. [13 Kitchen Changes That Can Help You Lose Weight]

The drop in Kansas' obesity rate is also a break from previous trends — until last year, not one state had seen a decline in its obesity rate for at least a decade. (Last year, obesity rates declined in Minnesota, Montana, New York and Ohio.)

The new report shows progress in fighting the obesity epidemic, but experts caution that Americans cannot become complacent about obesity.

"Obesity rates are still far too high, but the progress we've seen in recent years is real and it's encouraging," Dr. Richard E. Besser, president and CEO of the Robert Wood Johnson Foundation, said in a statement. "That progress could be easily undermined if leaders and policymakers at all levels don't continue to prioritize efforts that help all Americans lead healthier lives." [See the Full List of Obesity Rates by State]

The report used information from the Centers for Disease Control and Prevention's Behavioral Risk Factor Surveillance System survey, which tracks obesity rates in each state.

The obesity rate was highest in West Virginia, where 37.7 percent of the population is obese. Obesity rates also exceeded 35 percent in Mississippi, Alabama, Arkansas and Louisiana. Colorado had the lowest obesity rate, at 22.3 percent. Hawaii, Massachusetts and the District of Columbia also had relatively low obesity rates, between 22 and 24 percent.

Tackling the obesity epidemic will require efforts from governments, businesses, communities and families, the report said. Some strategies to counter the epidemic include:

"It's clear that the progress we've made in fighting obesity is fragile — and that we're at a critical juncture where continuation of the policies that show promise and increased support and resources could truly help bend the rising tide of obesity rates,” said John Auerbach, president and CEO of the Trust for America’s Health. "We're far from out of the woods when it comes to obesity. But we have many reasons to be optimistic," Auerbach added.