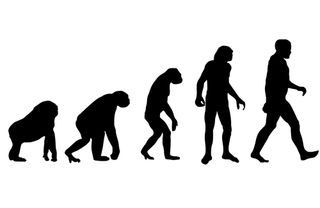 The ability to walk upright, called bipedalism, is a trait associated with the evolution of humans.
(Image: © imageZebra | Shutterstock)

NEW-YORK — Why is it that humans emerged from the natural world, yet we portray ourselves as modifiers of it, even its adversaries?

Paleoanthropologist Rick Potts thinks that fluctuations in the environment in which our ancestors lived were responsible. Our ancestors responded by becoming more versatile through a suite of changes that included an ability to modify our environment. Potts' theory is known as the variability selection hypothesis.

Human ancestors adapted "to novelty and to change itself," he told an audience here at a conference on climate change and human evolution at Lamont-Doherty Earth Observatory yesterday (April 19).

Our species, Homo sapiens, has existed for a mere 200,000 years, but since our line split from that of our closest living relatives, chimpanzees, more than 6 million years ago, global climate has grown increasingly variable, fluctuating between warm and ice-age extremes, but becoming cooler overall. [Top 10 Missing Links]

Our ancestors' East African habitat shifted from forest to savanna, and scientists have long suggested the arrival of the grasslands shaped their evolution.

Aside from the savanna, however, it has been only relatively recent that researchers paid much attention to climate and its effects on environment as an evolutionary force, said Potts, who directs the Smithsonian Institution's Human Origins Program.

Researchers have begun examining a number of potential triggers that could have driven human evolution directly or indirectly, including cycles in Earth's orbit and the wobble in its axis, heat, ice ages, changes related to the movement of Earth's tectonic plates, and dramatic fluctuations in lakes, as well as the shift from woodland to savanna.

Potts suggests that cumulatively, these changes in climate and the overall environment pushed our ancestors to evolve distinctly human characteristics.

When faced with extremes, a species has three options, he said: Die out, move to a suitable range, or become more adaptable.

The key innovations among our ancestors appear to have given them greater versatility, he said; for instance, there is now evidence that our ancestors began to walk upright about 6 million years ago, but maintained the option of climbing trees for millions of years afterward, he said.

Likewise, technological developments, such as stone tools or fire, gave our ancestors more options. Later on, a significant increase in brain size would allow them to behave in more flexible ways.

"In many ways this can be construed as a ratcheting up of adaptability," Potts said.

"We are the only ones left from a diverse family tree," Potts said. "The flip side of the adaptability question is the question of extinction."

For instance, Paranthopus boisei, who was nicknamed Nutcracker Man for his impressive teeth and chewing muscles, may have used that ability not to chomp on nuts but for a wide range of foods. However, this flexibility — using his impressive, versatile chewing equipment — likely required a lot of energy, Potts said.

The last in this lineage, Homo sapiens or, "wise man," today's humans have spread out much farther than any of our ancestors, modifying our environment and ourselves. In the process, we have ourselves become drivers of environmental change, on a global scale.

"In the long view, the line between thriving and decline is a fine one," Potts said. "That is a theme of human evolutionary history."