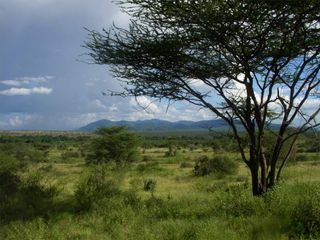 Caption: An East African savanna landscape of tree-dotted grassland is shown in this image from Samburu National Reserve in Kenya. The more heavily vegetated area in the middle distance is the corridor of the Ewaso Ngiro River. A new University of Utah study concludes that savanna was the predominant ecosystem during the evolution of human ancestors and their chimp and gorilla relatives in East Africa.
(Image: © Thure Cerling, University of Utah)

The savannas of Africa may have become the cradle of human evolution millions of years earlier than thought, researchers suggest. These rolling grasslands would have nurtured our ancestors through pivotal moments in their evolution.

These findings provide new ammunition in debates over the forces that helped distinguish humans from other animals.

The human lineage originated about 2.5 million years ago, coinciding with the expansion of savannas — grasslands mixed with trees — across East Africa. As such, researchers have long speculated that savannas were key to our evolution. For instance, the replacement of woodlands with savannas may have prompted the ancestors of humans to stray from trees and begin walking upright across the grass, which in turn would have freed up their hands for tool use.

Recently, however, the importance of savannas in human evolution came under question. For instance, what may be the earliest human ancestor discovered yet, Ardipithecus ramidus, was thought to have lived 4.4 million years ago in woodlands. [10 Mysteries of the First Humans]

The new research, based on a study of carbon isotopes in ancient soil, found that grassy, tree-dotted savannas apparently prevailed "for all of the last 6 million years in the environments in eastern Africa where some of the most significant early human fossils were found," said geochemist Thure Cerling at the University of Utah.

To get a better idea of the environments in which the human lineage evolved, scientists analyzed prehistoric soils for clues about how much tree cover was around back then.

The researchers focused on isotopes of carbon. The atoms of all carbon isotopes include  six protons, but the isotopes differ from each other in how many neutrons they have — for instance, carbon-12 has six, while the heavier carbon-13 has seven.

The warm-season grasses that dominate savannas engage in a kind of photosynthesis that involves both carbon-12 and carbon-13. On the other hand, trees and shrubs rely on a kind of photosynthesis that prefers carbon-12. By analyzing ratios of these different carbon isotopes in about 1,300 samples of ancient soil from Kenya and Ethiopia, researchers aimed to shed light on how wooded or grassy the locales were and for how long.

More than 70 percent of the sites were revealed to be savanna-like environments with less than 40 percent tree cover. Less than 1 percent of the ancient soil tested reflected sites where tree cover exceeded 70 percent, which would have made the area a forest.

"Wherever we find human ancestors, we find evidence for open habitats similar to savannas — much more open and savanna-like than forested," Cerling said.

Cerling added that even our tree-dwelling ancestor Ardipithecus apparently had a small component of warm-season grasses or related plants in its diet. "It was going into the savanna, unless it was eating takeout food," he said.

While many scientists think East Africa was forested before 2 million years ago and savannas emerged only afterward, Cerling said, the new findings suggest that during the development of bipedalism about 4 million years ago — that is, walking on two legs — savannas were present, even predominant.

Cerling suggested that human ancestors initially preferred narrow forests along riverbanks that provided shelter, food and shade. What might have then fostered the evolution of hominins — those species in the human lineage that came after the split from chimpanzees — were the many resources available in nearby savannas.

The scientists detailed their findings in the Aug. 4 issue of the journal Nature.