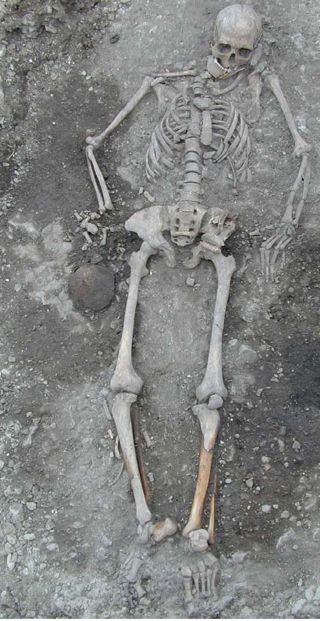 DNA taken from ancient European skeletons reveals that the genetic makeup of Europe mysteriously transformed about 4,500 years ago, new research suggests. Here, a skeleton, not used in the study, but from the same time period, that was excavated from a grave in Sweden.
(Image: © Göran Burenhult)

The genetic lineage of Europe mysteriously transformed about 4,500 years ago, new research suggests.

The findings, detailed today (April 23) in the journal Nature Communications, were drawn from several skeletons unearthed in central Europe that were up to 7,500 years old.

"What is intriguing is that the genetic markers of this first pan-European culture, which was clearly very successful, were then suddenly replaced around 4,500 years ago, and we don't know why," said study co-author Alan Cooper, of the University of Adelaide Australian Center for Ancient DNA, in a statement. "Something major happened, and the hunt is now on to find out what that was."

The new study also confirms that people sweeping out from Turkey colonized Europe, likely as a part of the agricultural revolution, reaching Germany about 7,500 years ago.

For decades, researchers have wondered whether people, or just ideas, spread from the Middle East during the agricultural revolution that occurred after the Mesolithic period.

To find out, Cooper and his colleagues analyzed mitochondrial DNA, which resides in the cells' energy-making structures and is passed on through the maternal line, from 37 skeletal remains from Germany and two from Italy; the skeletons belonged to humans who lived in several different cultures that flourished between 7,500 and 2,500 years ago. The team looked a DNA specifically from a certain genetic group, called haplogroup h, which is found widely throughout Europe but is less common in East and Central Asia.

The researchers found that the earliest farmers in Germany were closely related to Near Eastern and Anatolian people, suggesting that the agricultural revolution did indeed bring migrations of people into Europe who replaced early hunter-gatherers.

But that initial influx isn't a major part of Europe's genetic heritage today.

Instead, about 5,000 to 4,000 years ago, the genetic profile changes radically, suggesting that some mysterious event led to a huge turnover in the population that made up Europe.

The Bell Beaker culture, which emerged from the Iberian Peninsula around 2800 B.C., may have played a role in this genetic turnover. The culture, which may have been responsible for erecting some of the megaliths at Stonehenge, is named for its distinctive bell-shaped ceramics and its rich grave goods. The culture also played a role in the expansion of Celtic languages along the coast.

"We have established that the genetic foundations for modern Europe were only established in the Mid-Neolithic, after this major genetic transition around 4,000 years ago," study co-author Wolfgang Haak, also of the Australian Center for Ancient DNA, said in a statement. "This genetic diversity was then modified further by a series of incoming and expanding cultures from Iberia and Eastern Europe through the Late Neolithic."