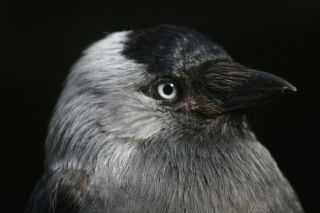 A smaller cousin of crows and ravens, the jackdaw, has eyes not unlike those of humans, with a dark pupil and whitish-colored iris.
(Image: © Auguste Bayern)

As anyone who's watched a reality show knows, group living can put a strain on relationships. Now, researchers have found living in a flock stresses out young ravens — an avian anxiety that resolves only when the birds pair off and gain territory.

A group of ravens is called an "unkindness" or "conspiracy," which seems fitting, since ravens are traditionally considered creepy; in fact, seeing many of them in one place can induce Hitchcockian "The Birds"-like flashbacks in even the least ornithophobic (those people with a fear of birds). But humans aren't the only animals who show distaste for groups of the jet-black birds. New research is showing the birds get stressed out when they find themselves in large groups, too.

Study author Bernd Heinrich, of the University of Vermont, describes these groups of young ravens as a "mobile discotheque" — a group of males fighting for dominance and females trying to find mates — something reminiscent of the cast of the MTV reality show "Jersey Shore."

The results suggest life in the fast lane of the ravens' mobile discotheque is much more stressful than life as a territorial breeding pair, and it's this stress that might push the ravens to settle down, said lead researcher Nuria Selva, of the Institute of Nature Conservation at the Polish Academy of Sciences in Krako.

"We expected the opposite," Selva told LiveScience. "Living in groups is full of benefits," including protection from predators, increased availability of food and freedom to wander from place to place. When the birds leave their groups, they have to protect their own territory from other birds, such as raptors and flocks of young ravens.

To get a better understanding of the bird's lifestyles, the researchers collected fecal samples from wild ravens that were either from young adults living in a flock, or from the territory of older birds living with a mate. They tested the samples for the levels of a stress hormone, called corticosterone, which regulates a bird's use of fuel, its immune health and its stress response. They also tested the samples to determine the sex of the animal and if it was infected by parasites.

The flock-living ravens had higher stress levels than those paired up. "By logic, we would think that to maintain a territory would be much more stressful," Selva said, because these birds have to fight for their land. Also, the territory-based females had much lower hormones than their mates, which the researchers say might be due to their increased energetic demands on the males to defend the territory.

While Selva didn't expect these lower levels, Wolfgang Goymann, of the Max-Plank Institute for Ornithology, who wasn't involved in the study, says he thinks it makes sense. "They live in a much more stable and predictable environment than the nonbreeders and hence I would have expected that their life is less demanding."

The flock is likely a stressful place because of the aggressive interactions that occur in competition for food and a place on the dominance hierarchy, he said. In youth, though, the detrimental effects of the increased stress seem to be worth it in exchange for the safety in numbers from being in a flock.

Mareike Stöwe, a researcher at University of Veterinary Medicine, in Austria notes that stress hormone levels could be influenced by earlier events experienced by the birds, so it's difficult to truly know the baseline levels. "We never know what the birds experienced before showing up at the carcass," Stöwe, who wasn't involved in the study, told LiveScience in an e-mail. "So it might well be that the hormone content in the droppings (at least in some of them) reflects a stress response to previous events (fights etc.)."

The samples were taken in January and February, a time when the ravens are pairing up and territories are secured. So those adult males without mates likely would be very stressed, Stöwe said, and it would be interesting to see their stress hormone levels at other times of the year.

Selva agreed that the higher stress levels may be a response to the competition occurring in these groups, with the increased stress hormones triggering a boost of energy use. That fuel boost would then allow the birds to travel and fight with the group to gain dominance.

The stress may also nudge young ravens to grow up. "The hormonal mechanisms play an important role in stepping from the young adult life to the adult life, we think," Selva said.

The research is detailed this week in the journal Biology Letters.