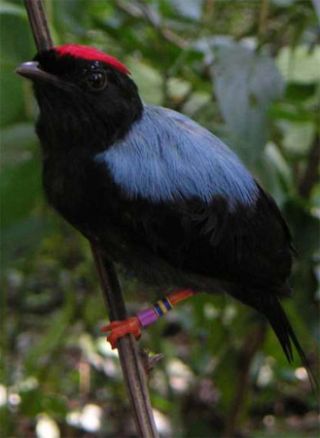 Some birds take the “wingman” approach to scoring a mate, the ornithological equivalent of two guys sallying up to a hot girl in a bar in hopes that one will get lucky.

This behavior isn’t totally selfless, however, and it turns out males of one tropical bird species receive future benefits from helping out an alpha pal.

The wingman of the lance-tailed manakin (Chiroxiphia lanceolata) is more likely to elevate to center stage than feathered friends who don’t play supporting roles, said Emily DuVal of the University of California, Berkeley's Museum of Vertebrate Zoology, lead author of a new study on the bird courtship behavior.

Grace and athleticism are optional for males in human courtship, but both are mandatory in manakin courting. Pairs of male lance-tailed manakins perform complex dances of “leapfrog” stunts and flight displays to woo interested females. When the curtain falls, only the dominant male gets the chance to mate while the beta bird, or sidekick, heads nestward alone.

To find out how this buddy system benefited the subordinate bird, DuVal monitored more than 450 tagged manakins on Isla de Boca in Panama. From 1999 to 2004, she followed changes in the manakins’ social status and completed genetic tests to identify chicks’ paternity and kin relationships among the adults.

The results, detailed in the April issue of The American Naturalist, showed males were not closely related, ruling out the idea that betas helped a brother out to pass along family genes. The beta birds rarely sired chicks, so they didn’t receive reproductive benefits.

Instead, betas got a delayed payoff, DuVal found. About 15 percent of betas became alphas the following year, although not always in the same territory where they served as betas.

One way to get an alpha badge would be to become a courting expert. DuVal suggests that along the way, the sidekick bird or beta “learns” the complex courting skills from the suave guru.

Beta males of lance-tailed manakins are generally younger than alpha partners, supporting the thinking that the phenomenon is akin to an apprenticeship.

"My results suggest that betas could actually benefit from staying betas for a while,” DuVal said, “for example by gaining courtship skills during a sort of apprenticeship or by forming alliances with other males who later act as their betas."