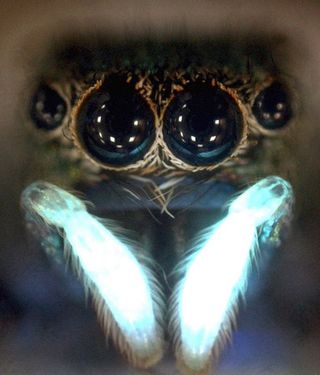 As if dressed for a psychedelic rave, jumping spiders sport glowing patches on their bodies to lure in eight-legged mates, a new study finds.

Jumping spiders of both sexes are known for their excellent eyesight, particularly in the ultraviolet wavelengths, and male jumping spiders are equipped with UV-reflecting scales that glow bright white and green [image] under the sun's ultraviolet light.

The spiders display and pose these body parts to intimidate other males. Such bright ornaments seemed a likely mate-lure, but no one had yet found evidence of them in action.

Under ultraviolet light, the male and female were seen to hit the "dance floor" with their bodies aglow [video]: Turns out, females have their own "glow stick"--their front appendages, called palps, glowed in a bright green hue under UV light [image].

As courtship progressed, the male arched its body, vibrated its palps and slinked on tiptoe toward the female. The female spider hunched, seeming to play hard to get, and then scampered away.

Researchers also observed the spiders when one sex was in full-spectrum light and the other in UV-deficient light. When a partner was not lit up by UV, the females showed no interest, suggesting that a male must show its good before courtship can proceed. Males ignored or showed much less interest in females under UV-blocked light.

The scientists suggest such striking differences between male and female coloration under UV light are crucial in courtship for these jumping spiders.

The research is detailed in the Jan. 26 issue of the journal Science.