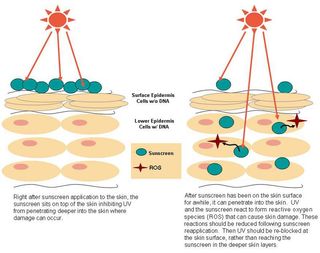 When used properly, sunscreens are proven to prevent skin damage. But if not applied often enough, a sunscreen can actually enhance skin damage, according to a new study.

Ultraviolet (UV) radiation from the sun is absorbed by skin molecules and generates reactive oxygen species, or ROS molecules, which cause visible signs of aging by damaging cell walls and the DNA inside them. Too much sun, especially in childhood, increases the risk of skin cancer.

But over time, the filters themselves penetrate deeper into the skin, allowing more UV radiation in.

Then things get worse.

In the new study, scientists found that three widely used, FDA-approved UV filters (octylmethoxycinnamate, benzophenone-3 and octocrylene) actually generate ROS in skin when exposed to ultraviolet radiation. So the sun's damaging effect is multiplied when the sunscreen has been on too long. [Graphic]

"Sunscreens do an excellent job protecting against sunburn when used correctly," said chemist Kerry Hanson of the University of California, Riverside. "This means using a sunscreen with a high sun protection factor [SPF] and applying it uniformly on the skin. Our data show, however, that if coverage at the skin surface is low, the UV filters in sunscreens that have penetrated into the epidermis can potentially do more harm than good."

Hanson and colleagues applied sunscreen to model skin tissue and imaged its travels into deeper layers and the effects.

"More advanced sunscreens that ensure that the UV-filters stay on the skin surface are needed," Hanson said.

Also, the researchers note that while most sunscreens block one wavelength-band of ultraviolet radiation, called UVB, few block the deeper-penetrating UVA. The federal government just approved in July a UVA blocker for use in the United States.

Meanwhile, the scientists have passed along the advice of the Skin Cancer Foundation, which recommends reapplying sunscreen every two hours, and especially after sweating or swimming.

The study, announced today and funded by the National Science Foundation and the National Institutes of Health, will be detailed in the journal Free Radical Biology & Medicine.