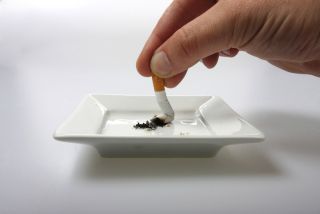 Smoking causes 480,000 deaths in the United States yearly, according to the CDC.
(Image: © Ashtray photo via Shutterstock)

Cigarette smoking has hit the lowest point ever among American adults, a new report finds.

The percentage of U.S. adults who smoke cigarettes was 17.8 percent in 2013, a drop from 20.9 percent in 2005, and the lowest rate of smoking since researchers began tracking this figure in 1965, according to the report from the U.S. Centers for Disease Control and Prevention (CDC).

The report also found the number of cigarette smokers was 42.1 million in 2013, a drop from 45.1 million in 2005, even though the U.S. population is increasing.

"There is encouraging news in this study, but we still have much more work to do to help people quit," Dr. Tim McAfee, director of the CDC's Office on Smoking and Health, said in a statement. [10 Scientific Quit-Smoking Tips]

The decline in smoking rates varied among different populations and regions. Smoking remains particularly high among people who live below the poverty level, those who have less education, and those who have a disability or a limitation, the report found.

The smoking rate is also high among Americans of multiple races, American Indians and Alaska Natives, compared with people of other ethnicities, the report found.

Cigarette smoking is considered the leading preventable cause of disease and death in the United States, killing more than 480,000 Americans each year, according to the CDC. Smoking leads to cancer, and is also a factor in heart and metabolic diseases, which account for 40 percent of tobacco-related deaths, according to the U.S. Surgeon General's report in 2014.

"We can bring down cigarette smoking rates much further, much faster, if strategies proven to work are put in place," McAfee said. These strategies include funding tobacco control programs, increasing prices of tobacco products, implementing smoke-free laws, and producing hard-hitting media campaigns, he added.

The report found that current smokers are on average cutting down on cigarettes. Among current cigarette smokers, the proportion of those who smoke every day was 76.9 percent in 2013, decreasing from 80.8 percent in 2005. People who smoked daily reported smoking on average 14.2 cigarettes per day in 2013, compared with 16.7 cigarettes in 2005.

But "cutting back by a few cigarettes a day rather than quitting completely does not produce significant health benefits,” said Brian King, a senior scientific adviser with the CDC's Office on Smoking and Health. "Smokers who quit before they’re 40 years old can get back almost all of the 10 years of life expectancy smoking takes away."