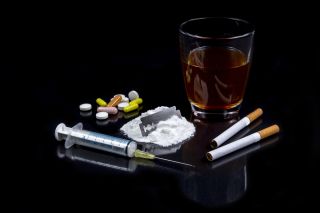 Nearly 21 million Americans ages 12 and older had a substance use problem in 2015, according to a new federal estimate.

In addition, 1 in 3 people with a substance use disorder had a disorder related to drug use, and 1 in 8 people had a disorder involving both drugs and alcohol, Enomoto said.

For the report, the federal government used the definitions of substance use disorders as they are explained in the American Psychiatric Association's Diagnostic and Statistical Manual of Mental Disorders. People are considered to have a substance use disorder if, for example, they have strong urges to use a substance or can't control their use of it, or if their use impairs them in social situations or leads to risky behavior.

The report also said that an estimated 27.1 million people in the U.S. used an illegal drug in the past month. The national estimates are based on the findings of the National Survey on Drug Use and Health, an annual survey on drug use. The 2015 survey included interviews with about 67,500 people.

The survey also revealed that, in 2015, about 1 in 12 Americans needed some form of substance use treatment, Enomoto said. But only about 11 percent of these people actually received treatment, she said. [The Drug Talk: 7 New Tips for Today's Parents]

Drug use in the U.S.

Marijuana remains the most commonly used drug, Enomoto said. Among people who reported having used any drugs in the previous month, 87 percent said that they had used marijuana, she said.

And more people reported using marijuana during 2015 than during any single year between 2002 and 2013, according to SAMHSA. But notably, marijuana use didn't increase among adolescents, Enomoto said. Rather, the overall increase was driven largely by more use of the drug among adults ages 26 and older, according to the report. In 2002, 4 percent of adults ages 26 and older who were surveyed reported using marijuana, but in 2015, that number was 6.5 percent.

Among those who reported using opioids in the past year, prescription drugs were the most common type used, Enomoto said. An estimated 3.8 million people in the U.S. currently misuse prescription pain relievers, according to the report.

An estimated 830,000 people in the U.S. used heroin in 2015, Enomoto said — more than double the number from 2002. She noted that there was a slight decrease, however, in heroin use from 2014 to 2015, but it was not statistically significant (meaning it could have been due to chance).

In addition, nearly 300,000 people knowingly used the drug fentanyl in the past year, Enomoto said. Fentanyl is a prescription painkiller that is up to 100 times more potent than morphine and is often linked to fatal overdoses. In many cases, people who use heroin may unknowingly use fentanyl, because heroin may be laced with fentanyl.

However, the findings also suggest that the prevention efforts do work to curb substance use, Enomoto said.