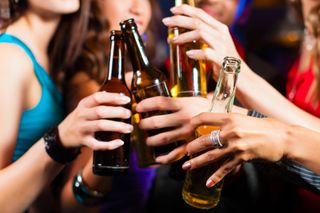 One simple question may reveal a lot about a teen's risk of developing an alcohol problem, a new study finds.

The study focused on teen alcohol screening, or questions that doctors can ask to flag those who may be at risk for problem drinking. Results showed that one question — how many days they drank in the past year  — was particularly good at spotting those at risk for a drinking problem, which researchers call alcohol use disorder.

The researchers took the screening a step further. They found that a screening test that included just this question, which was then followed by a detailed diagnostic test for teens who answered yes, could accurately identify 91 percent of teens with alcohol use disorder, the study found. Alcohol use disorder is drinking that is causing people harm or distress, including problems at school and with relationships. [The Drug Talk: 7 New Tips for Today's Parents]

Because doctors often have only a short time to spend with patients, researchers have tried to come up with ways to assess a patient's risk for alcohol disorder with just a few questions. A two-question screening test based on people's age already exists for teens. But the new study suggests that just one question about a teen's frequency of alcohol use "would be a simple, brief, and cost-effective clinical assessment procedure," said the researchers, from the University of Pittsburgh.

The study was based on surveys of nearly 1,200 teens ages 12 to 17 in rural Pennsylvania. Participants answered not only screening questions, but also questions to diagnose alcohol use disorder based on the latest definition in the Diagnostic and Statistical Manual of Mental Disorders, 5th Edition (DSM-5).

About 10 percent of participants in the study over age 14 met the criteria for having alcohol use disorder, the researchers found.

The study was published online yesterday (April 5) in the Journal of Pediatrics.